What are the advantages and disadvantages of anaerobic digestion vs composting is a question asked by a large number of people.

Many of our readers who are familiar with composting, but who are thinking more widely about the subject of recycling organic waste and have just heard about Anaerobic Digestion want to know the anaerobic digestion pros and cons.

If this is you, read on while we answer the question: “Which is best, anaerobic digestion, or the much simpler and lower capital cost method of composting?”

Now we make the case for each process by listing the advantages and disadvantages of anaerobic digestion vs composting below:

3. This disadvantage is the biggest disadvantage of composting! Composting requires the input of quite large energy inputs to fuel and operate the equipment needed to aerate and turn the compost piles.

By comparison, anaerobic digestion wins hands-down for “greenness” by providing its own power to do this.

Composting makes no contribution to reducing the carbon footprints of the businesses that use the composting process.

By comparison, AD Plants can assist businesses by reducing their carbon footprint.

4. Like AD, if run inefficiently, composting can cause an odour nuisance.

The Difference Between “Green” and “Food” Waste Compost

The are to distinct “Green” and “Food waste” compost types and input materials according to their source.

Green and food-derived composts can be used in landscape and regeneration projects. Green compost is solely derived from garden waste and comes from sources such as domestic gardens, municipal parks and recreational areas, and is collected separately from other waste streams.

This compost is usually produced outdoors in open windrows.

Food derived compost contains a mixture of garden and food waste collected separately from other waste streams from households and businesses. This compost is produced in enclosed in-vessel systems and must be compliant with Animal By-Products Regulations (ABPR), as well as the relevant waste legislation. via wrap.org.uk

We also found the following blog articles which discuss anaerobic digestion vs composting as follows, which you might find interesting to read:

Anaerobic Digestion – an Alternative to Composting

Similar to composting, in AD bacteria consume organic waste such as food scraps, silage, and animal waste and generate an environmentally benign byproduct that can be used as a natural fertilizer. Unlike composting, however, AD also produces biogas, which consists of about 2/3 methane (CH4). Natural gas is methane with a small amount of other trace gases, so biogas can be used as fuel like natural gas. … via ADAlternativeToComposting

What's the Difference Between Anaerobic Digestion and Aerobic Decomposition

Yes, one is with and the other without oxygen, and both divert waste from the landfill—but in terms of the end products, what is the advantage of anaerobic digestion? Simply put, does society face a shortage of compost or renewable energy?

In San Francisco, the green compost bins are ubiquitous. Even the food trucks are required to place bins alongside their trucks for compost, recyclables, and trash. Result: the city is diverting an enormous amount of trash from the landfill to help meet its zero-waste goal and producing lots of compost in the process – a process which also produces a lot of carbon dioxide, “the primary greenhouse gas emitted through human activities,” according to the EPA.

A few cities are taking an alternative, more expensive approach to diverting this organic waste called anaerobic digestion and in the process also producing biomethane that is captured for use in electricity generation or used as a transportation fuel. And from a “carbon intensity” perspective, this biogas, also called renewable natural gas, scores at the bottom of carbon intensity chart for California's Low Carbon Fuel Standard, i.e. it is one of the cleanest of all transportation fuels…. Pop Quiz Difference

Anaerobic Digestion vs Composting: Another Way to Compare the “Aerobic” Process of Composting with “Anaerobic” Digestion is to compare the simplified process diagrams which we show below:

There are advantages to both anaerobic digestion and composting, and certainly applying either before green garden waste, or other organic waste is spread on the land, is better than not processing these materials at all.

On balance, the preferred process is anaerobic digestion.

The primary reason that anaerobic digestion is considered more sustainable than composting is that composting requires an energy input to carry out the process. The energy is used in the power needed to turn the compost piles during composting.

The fact that anaerobic digestion:

are generally the factors that make anaerobic digestion the best, most sustainable, option.

Although composting (IVC or in Windrows) and anaerobic digestion (AD) treat similar wastes, they are in fact complementary and not competing technologies.

From an energy consumption and greenhouse gas emission reduction point of view, there is merit in having an AD stage first following by composting.

The benefit of an AD process is that it produces energy in the form of biogas, whereas composting will generally use energy in the processing stages, in aerating the waste and treating any leachate arising from the process. Although the AD liquor which comes out of an AD plant often needs treating, the energy required is available from the biogas.

The digestate from AD often needs to be matured by composting before it can be applied to land.

Since the AD process has reduced the total amount of material (which has been removed as gas), less energy should be required than if the whole amount of waste was treated through composting.

Notwithstanding these issues, some proportions of materials are inherently better suited to either composting or anaerobic digestion.

For example, high proportions of green waste with much bulky wood material is better suited to composting processes as it is easier to handle and has less gas production. Conversely, high proportions of kitchen waste are better suited to AD processes as the gas production potential is
higher and odour control is easier to achieve.

We hope that you found this article useful. If so, and you have a moment to do this. We would greatly appreciate your comments. 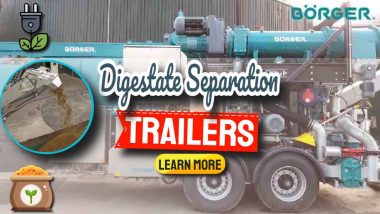 Digestate Separation Trailers and a New Breed of Contracting Businesses 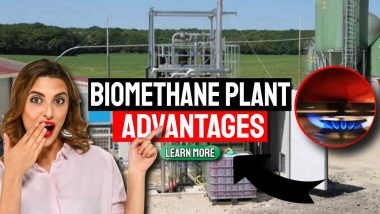