A new company named HomeBiogas is set to become a big player in the anaerobic digestion industry but tailored to home biogas requirements. For them, it is all about producing biogas in the home, or more accurately outside in the yard! Home biogas is widely produced in developing regions of the world. However, in the last couple of years, entrepreneurs have started to produce well-designed home anaerobic digestion plants for single homes in the developed nations as well.

The feedstock chosen is kitchen scraps and green garden waste.

In particular Israeli startup, Home Biogas has developed a relatively affordable home-sized biogas unit that allows people to convert their own waste into fuel.

In Israel, temperatures get quite hot in summer, but where winter lows have included snowfall, it is not the best location due to the cold winters.

Reportedly, even Northern California winters can be cold enough to make the bacteria stop producing if HomeBiogas is outside. Choosing a sheltered sunny location in your yard or garden can make a big difference though. 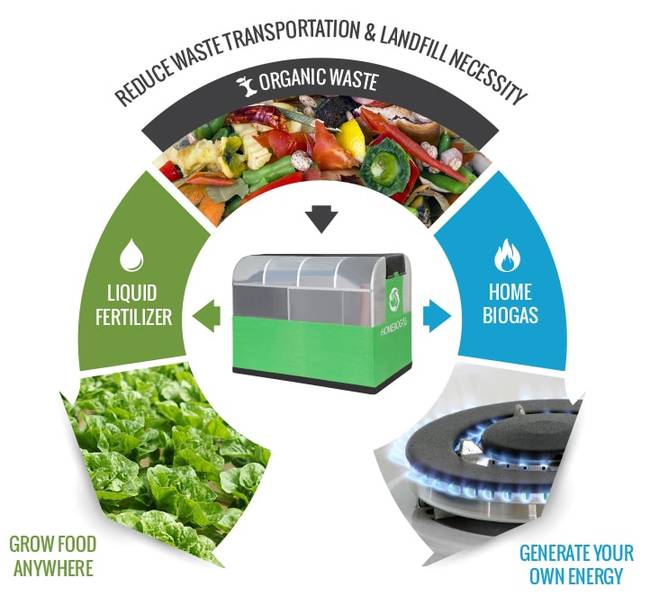 Until now nobody has taken on the high-tech renewable energy technologies with a main-stream AD product. But, there is a strong argument for their unique business offer of low-cost renewable energy. Solar panels are expensive. This is even more true, now that solar panels will not be supported by the UK government for new installations after the end of March 2018. Due to the cessation of the UK Renewable Heat Incentive.

Although the cost of each solar panel has dropped by about 30% in the UK, in 2017-18 even before the withdrawal of the subsidy for new solar panels, an average solar panel installation for a household would take 10 – 12 years to pay back the initial investment in solar panels.

In addition to the lower upfront cost of anaerobic digestion, home biogas does not require a grid-tie or any type of energy storage, as energy is stored in gas form and used on-demand when needed. On this basis, home biogas is certainly worth looking at, discussed in the remaining part of this article.

According to the company information the standard AD plant offered which is simply called “Homebiogas” can use up to 6 liters (6 qt) of food waste or up to 15 liters (15 qt) of animal manure per day.

This is certainly more than an average UK family would produce in a day, and hence the HomeBiogas can instead be a community biogas project, where residents living in the same block can dispose of their food waste into the community HomeBiogas system.

HomeBiogas Plants for Rooftops and Verandas

The benefits from that could be in return, that they might get a supply of the digesters gas output piped into their homes. It is hard to see how this might physically be installed. For an average apartment block, it could be done at least in theory be located if the apartment had a reasonably sized rooftop area. Home biogas plants must not be situated indoors due to the safety hazard should the gas escape.

HomeBiogas do state that their digesters can be used in an urban environment, and located on rooftops.

Use Your Home Biogas Supply for Daily Cooking

On average, HomeBiogas can produce clean gas for up to 3 hours of cooking and 5-10 litres of clean natural liquid fertilizer daily. So, the output is quite definitely a worthwhile amount of fuel to have and to use in the home. But, one advantage should also be to reduce food waste.

Food waste is a huge problem in the UK, so it could be argued that a method to produce renewable energy and gain value from food waste, should be a candidate for government financial assistance. But, on the other hand, using any biogas digester may not be effective in reducing food waste.

That's because people might use the HomeBiogas system as a reason to not reduce the amount of food wasted, as they may tend to produce more. The more food waste the system is fed with, the more HomeBiogas can turn it into useful energy.

Use Your Home Biogas Plant Liquid Outflow to Fertilize Your Garden

HomeBiogas can provide between 5-10 litres of top quality natural fertilizer each day.

Not everyone is going to find the output useful, normally called digestate it needs to be disposed of responsibly. If everyone with a home digester lived in flats and had no use for the fertilizer, it might get flushed down toilets. This would put a large and unwanted burden on sewage treatment plants.

HomeBiogas claims to be a socially-oriented company that cares about spreading biogas technology to all. They seem to be meeting that expectation very well.

The company is based in Beit Yanai, Israel. As a new company, they only manufacture digesters of a small size as backyard appliances that convert organic waste into cooking gas and liquid fertilizer. No doubt larger models will emerge from them at some future date.

Having already crowdfunded one backyard home biogas system that's now being used in more than 1,000 homes worldwide, HomeBiogas', the current model is their second kickstarter focused on bringing a redesigned, more efficient and lower-cost version to mass production. They say that they subsidize a percentage of shipping cost to give you, the consumer, the lowest possible shipping price.

In addition to the biogas plant, a Chinese company Puxin provides the accessories you will need including a biogas storage and transport bag.

This company now sells a toilet as an accessory to feed human waste into their home digester units, more about that here.

The HomeBiogas website is proving successful. Web Traffic by SimilarWeb Traffic Homebiogas is ranked 652,866 among websites globally based on its 64,947 monthly web visitors. 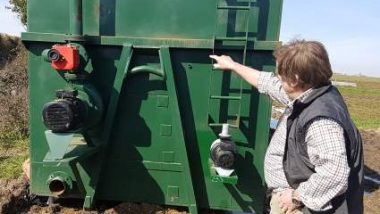