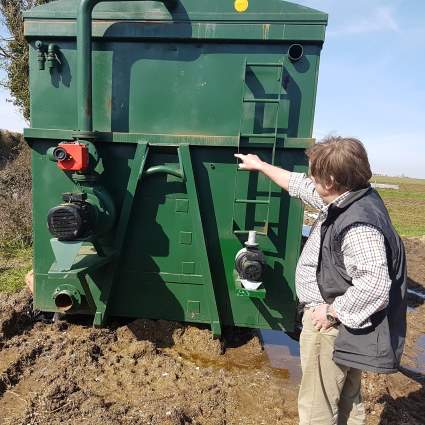 25 Landia Chopper Pumps bought one after the other! Why? Chris Reynall describes the pump that; “is a processing device in its own right. Chemically and biologically, it breaks everything down – and doesn’t get blocked”.

The tagline on the Bioplex website reads ‘Defining the Future of Recycling’. True. But it could so well be described as: ‘Love of Sustainability’.

True love in fact. For Chris Reynell (inventor of the revolutionary multi-stage hybrid Bioplex process) actually met his now wife Jane during an industry visit to a digester back in 1990.

Five years later, determined to join up all the dots in what has now become more trendily described as the circular economy, Chris had created his first digester at Windover Farm in Hampshire, which has been in Jane’s family for over 100 years.

A 420-herd dairy farm – with organic status for the past decade – Windover has benefited considerably from Chris’ pioneering research and development, which evolved into the creation of Bioplex in 1999.

In at the deep end, the very problematical feedstock of straw-based manure was used for the process. The long-term Bioplex aim was to achieve highly efficient, reliable processing and enhanced energy recovery from manures, grass and other energy crops, as well as food, trade, garden and local authority wastes – so that everything was put to sound sustainable use.

But typical of Chris, he saw well beyond the conventional AD plant. And equally as characteristic of such a strong believer in sustainability, he was adamant that he’d invest in equipment that would do the job – and stand the test of time.

An integral part of the process is what he fondly describes as ‘more than a pump’, which has gone on to serve Bioplex projects all over the UK.

There’s no trouble in identifying his 25th consecutive pump from one manufacturer, because to mark the occasion, the supplier, Landia, painted it silver especially for its loyal customer.

The ‘silver machine’ will play a key part in helping generate 30kW of green energy for Windover Farm’s upgraded dairy, which will eventually see its electricity bills become a thing of the past – with instead – an excess of energy.

“Landia’s pump is so much more than a pump”, said Chris. “I see the four units we have at our farm as the gatekeepers, like the teeth of a cow. I know that when everything gets through the pumps, then the rest of the process works fine.

“Going back to my first enquiry and subsequent purchase in 2006, I also liked Landia because they weren’t pushy and didn’t make extravagant claims. Up until that point, I knew that we were seriously testing our process, so at one stage, we ended up with a tank that wouldn’t mix with the existing equipment.

Landia simply told us what their pumps would do – and they succeeded. The flail effect of the Landia chopper pump soon saw our straw come out like peat. Over the years, the 24 pumps we’ve now purchased from Landia have been nothing other than totally reliable”.

Interestingly, some of Bioplex’s first projects were for prisons where the process came in to its own.

Food waste and garden cuttings are loaded into a reception tank (which can be used for pasteurising), chopped, blended and pumped into a first stage digester where it undergoes hydrolysis and fermentation. When necessary (if the feedstock is dry), active bacteria and extra water are added – and the contents then heated for hydrolysis and optional pasteurisation.

“The food waste was unrecognisable. We also saw a noticeable improvement in the levels of our gas yield. Landia don’t market themselves as process engineers but they have loads of practical experience so know what they are doing. For me, their chopper pump is a processing device in its own right. Chemically and biologically, it breaks everything down – and doesn’t get blocked”.

In controlling pathogens, weed seeds and parasites during two to four days of first-stage digestion, the contents of the Bioplex process are pumped to the second stage digester, producing biogas, fertiliser and fibre. Supplied as a complete system or used as an add-on to enhance conventional anaerobic digesters, process times are significantly reduced, resulting in a smaller AD plant and footprint. Importantly, the modular plant’s digested and composted solid material is put to the best possible use as organic fertiliser-rich fibre for soil conditioning and as a growing medium, which at the same time reduces peat and petrochemical-based fertilisers.

“We’ve been able to join all the dots on sustainability”,

“with a process that kills weed-seed and pathogens. And because the digestate from our AD process is so much quicker and easier to spread, it also reduces our diesel costs and produces better soil for the long term good of our farm. There’s also no wastage with low nutrient fibre from the process, which can be used as a solid fuel (similar to peat) in boilers and wood-burning stoves”.

With at least two stages in its process, the Bioplex technology enables the conditions for hydrolysis and fermentation to thrive, breaking down more of the cellulose materials.

This makes the digester far more resilient to a much wider variety of feedstock, even with daily changes in the type of material. In turn, the economics of buying in or the growing/harvesting/storing energy crops such as maize and fodder beet and can be offset by the use of feedstocks such as horse stable manure, farm animal manure, grass clippings, and fruit/vegetable wastes.

During almost two decades in the emerging AD/Biogas industry, it’s not all been plain sailing of course, but Chris has stuck firmly to his quest for a cost-effective, highly efficient process that has true sustainability at heart.

“Feedstock can be very unpredictable”,

“For some AD plants this has caused an immediate and then long-term problem with pumps and mixers that can’t cope with some of the typical challenges of farm and food waste.

Our constant factor, which for over a decade has given us increased confidence and peace of mind to take on R&D projects all over the country, has been the outstanding performance and durability of Landia’s pumps and mixers – plus the fact that whenever we’ve needed any help or advice, the company has been all ears. The very first Bioplex unit with a Landia pump, which was installed in 2006 for hydrolysing and pasteurizing fish waste in Scotland, is still working perfectly”. 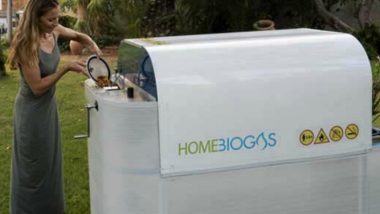 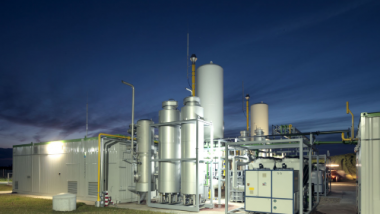 Biomethane Production: Sweden Leads with Schmack Carbotech Plant – Plus One in France