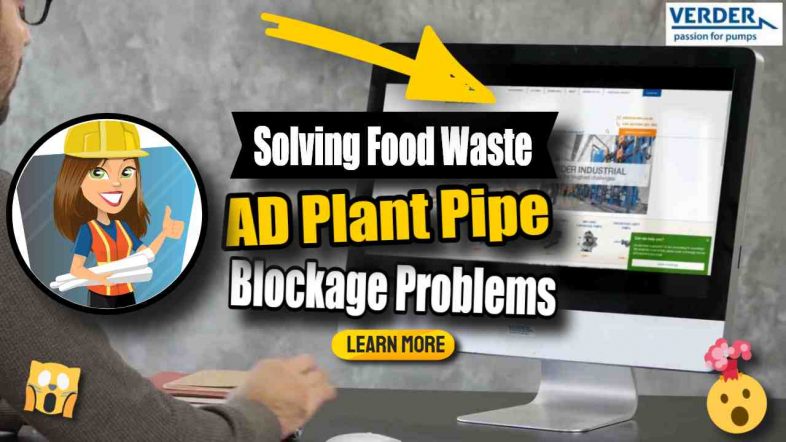 In this article, we explain a highly effective way to solve food waste digestion plant pipe blockage problems, by using specialist pumps that are highly efficient in pumping difficult to pump fluids.

The topic of how to prevent food waste anaerobic digestion plant pipe blockages is a recurring problem for some plant operators. However, it can be readily solved by the choice of suitable pumps designed for pumping mixed feedstock slurries.

In fact, the subject came up as long ago as 2014 at the RWM Exhibition in Birmingham, while I was talking to anaerobic digestion and biogas plant service providers on their exhibition stands.

A recurring topic that came up was the significant number of UK biogas plants that have been afflicted by pipe blockages. Back in 2014, when this article appeared in its original form, there were many cases resulting in long plant outages, and very substantial lost biogas production.

Pipework systems in which substrate flow has become blocked may have to be dismantled to physically clean them. That can be difficult unless process design pipe layouts, and pumps, are designed for this to be done. Watch our video below in which we took this to heart – just like Verder Pumps did many years ago!

The Short Video below explains the consequences when a Biogas Plant Stops Working:

(Please try not to get too emotional while watching!!)

It seems that it has been at those biogas plants which digest solely food waste, or those where the operators have added food waste to their substrate, that this problem has been most acute.

What was also surprising to hear was that;

“expert AD consultants have been slow to appreciate the greater demands on pumping systems which the addition of food waste as a substrate imposes.”

Another view expressed is that construction budgets have been reduced much too far by the high competition for work within the AD industry.

The recent UK government-led push toward reducing food waste, and digesting what remains, rather than sending it to landfill, resulted in a lot of additional biogas plants accepting this type of waste in 2014.

Problems began to occur soon after plant commissioning at some locations. The problem remains to this day unless suitable pumps are used.

The result of these pump clogging incidents has been some very highly stressed UK biogas plant operators!

Food waste varies enormously in viscosity, and in the UK tends to arrive at AD Plants with a lot more packaging still present, or so it seems than has been the experience previously elsewhere in Europe.

So, it is not only UK based experts that have been caught out! There are two main problems which have been causing blockages. These are foreign matter, and the high viscosity of much food waste. 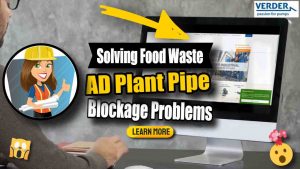 De-packaging equipment isn't totally successful in removing all foreign matter and this, particularly if fibrous in nature, may build up on pumps reducing efficiency, leading to blockages.

Biogas plant operators have naturally been reluctant to pay for specialist pumps due to their greater cost, nevertheless, the cost of plant outages can be huge.

Digestion plant pipe blockage is especially damaging when Anaerobic Digestion Plant operators are unable to process their waste feedstocks for a period and may need to tell their suppliers that they are unable to accept more deliveries.

The value of the power produced from biogas plants to the electricity grid operators is also dependent upon high plant operational availability.

There are a number of types of positive replacement pumps on the market, but suppliers inform me that the one being used most often nowadays for these plants in the AD industry is the peristaltic pump designed for pumping solids and slurries.

Such a system is that manufactured by our sponsor Verder Pumps.

They have produced details of case studies for sites where their Verderflex peristaltic pumps have been installed by them, and are operating successfully.

Verderflex peristaltic pumps were installed at a prestigious brewery, based in Norfolk.

This brewer produces fine quality real ales, which result in organic residues which are treated in their anaerobic digestion (AD) facility, where they are producing biogas to be fed into the national gas grid.

The anaerobic digestion facility is also fed with kerbside-collected food waste, food processing waste, and supermarket food waste in addition to their own brewery waste.

During the process, the substrate enters a feed inlet at the start where a rotor chopper pump breaks down the raw material after which it is stored in a holding tank.

Verderflex peristaltic pumps transport the chopped slurry from holding tanks and through a heat exchanger to raise the substrate's temperature to a level suitable for efficient digestion, prior to its entering the main AD plant digester tanks.

As this hot organic matter enters the main AD facility it is dosed accurately at a pre-set rate, by a Verderflex Dura Pump with a pH buffer solution to accelerate and maximize the breakdown of the material.

The large mass of organic material is ‘churned’/ recirculated by Verderflex pumps located in a plant room connected through a series of pipes into the digester tanks. This maximises the surface area of the incoming material available for use as food by the bacteria and thereby accelerates the AD process.

In fact, this is described as being instrumental in raising the yield of heat and biogas from this plant.

After completion of the AD process, the digestate and waste water is pumped from the tank by another Verderflex peristaltic pump for further use as fertilizer.

For further information on peristaltic pumps visit the Verder website at: www.Verder.co.uk

[This article was originally published in September 2014. Latest update May 2021] 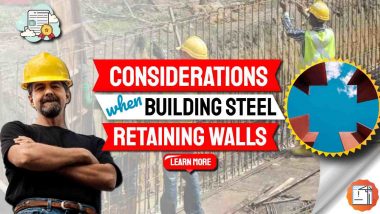 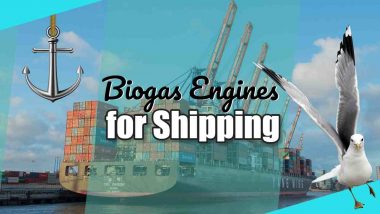 Recent News and Developments in Biogas Engines for Shipping