The UK Brexit from the EU is about to hit UK on-farm anaerobic digestion. What has been a growing success story for the UK is being predicted to quickly become a victim of the UK government's plans for the exit of the nation from the European Union.

Other sectors, such as the anaerobic digestion of the organic residues from waste management, including food waste anaerobic digestion, are being characterised as less hard hit. UK Brexit has had a seismic effect on the renewable sector and has created widespread uncertainty. The Department of Energy and Climate Change (DECC) has been decommissioned.

At the current rate of degression, and without a government department in place, AD pre-accreditation could become unviable by March 2017 according to Bill Chubb, managing director of Green Gas UK Ltd.

The uncertainty surrounding the electricity tariff and the difficulty involved with RHI eligibility mean AD establishments must seek additional income in the form of gate fees for food waste, sewage, effluent, slurry, etc.

According to Bill, unless there is a massive policy change, the short-term outlook for AD plants in the UK agricultural sector is not promising, while food waste plants are better positioned. via Student blog: The viability of anaerobic digestion

Most commentators are surprised about the UK government's policy U-turn from being a substantial subsidiser of the technology, to a complete failure to appreciate the benefits. That is a failure which now risks the death of many of recenly formed innovative and dynamic UK anaerobic digestion businesses.

A new industry which was showing so much promise for UK jobs, and exports, looks likely to be decimated by the turn-around just at the time when, if supported for a few more years, the industry may well have become a world-beating exporting UK technology sector.

It is all the stranger to understand when other countries, like North American, are just waking up to the benefits, as follows:

US EPA Proclaims the Benefits of On-Farm Digesters

On-farm digesters can bring great value to farmers, and the surrounding community. Digesters can help farmers manage nutrients, reduce odors, and generate additional farm revenue. Dairy, swine and poultry are the primary animal types for farms with digesters. On-farm digesters can also accept outside food waste as a feedstock.

The most common digester system technologies on farms in the United States are: plug flow, complete mix, and covered lagoons. Learn more about on-farm digesters and how value can be recovered from waste (manure)

The type of digester used on farms is typically determined by the manure management practices in place and type of animal manure that is fed into the digester. Biogas collected from the anaerobic digester systems is often used to generate electricity, to fuel boilers or furnaces, or to provide combined heat and power. As of 2016 there are 242 operating digesters on livestock farms in the United States.  This data is tracked by EPA’s AgSTAR program.via Anaerobic Digestion (AD)

Anaerobic digestion can play an important part in many waste-reduction or zero-waste management programs because organic refuse that typically would be sent to landfills can be used to produce energy as biogas.

This waste management strategy is increasingly being used throughout North America, but the municipal sector remains “a relatively untapped market in the U.S.,” according to a new report from Renewable Waste Intelligence. But more government entities are pursuing anaerobic digestion to comply with local and state waste management and renewable energy mandates.

For example, Connecticut, which enacted a state waste reduction law in 2011, currently has no anaerobic digestion facilities. But, five are scheduled to go online, the first in late 2017. via Cities Adopting Anaerobic Digestion | RWL Water 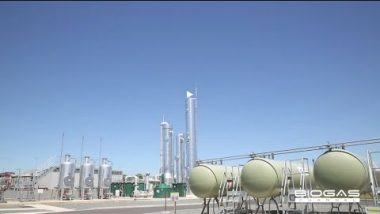 Electricity Demand Response and the Anaerobic Digestion and Biogas Industry