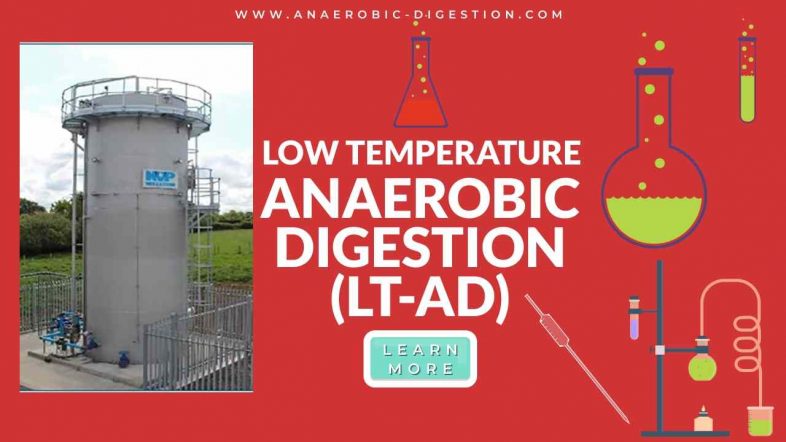 Anaerobic digestion (AD) is a cost-effective and commonly utilised waste and wastewater treatment method. It's usually done at a mesophilic (25-37oC) temperature. Many industrial wastewaters, on the other hand, are discharged at lower temperatures, and functioning in the mesophilic range necessitates the use of energy to heat it.

Anaerobic digestion at low temperatures (20°C) is a cost-effective option that has been demonstrated in the laboratory, on a pilot size, and in practice.

The ability of such systems to generate income from the methane energy output, added to the savings on industrial trade effluent charges, is highly advantageous.

The great majority of biogas facilities in use across the world are continuously stirred tank reactors (CSTRs). They are not appropriate for low-temperature AD due to the extremely long retention durations required and the resulting extremely large tank sizes.

In a long-term experiment, CSTRs were utilised to examine the feasibility of psychrophilic (low temperature) digestion of perennial ryegrass (150 days). The reactors were run in parallel at temperatures of 10, 15, and 37 degrees Celsius. Volatile solids (VS) degradation, soluble chemical oxygen demand (SCOD), and volatile fatty acids (VFA) generation were used to quantify hydrolysis, acidification, and methanogenesis, respectively. The amount of methane produced was also measured. Low-temperature operation of CSTR biogas plants, on the other hand, has traditionally been regarded uneconomic and thus not commercially viable at such a lengthy retention duration.

Many water treatment systems require low-temperature phosphate removal. Low-temperature (12°c) anaerobic treatment of synthetic sewage effluent was apparently achieved using an experimental hybrid sludge bed/fixed-film (packed pumice stone) reactor. Successful phosphate removal from wastewater (up to 78% of influent phosphate) has been seen, according to at least one technical paper, mediated by biofilms in the reactor.

At 15°C, the effect of sulphate addition on the stability of low-temperature anaerobic expanded granular sludge bed-based bioreactors and microbial community behaviour was examined. Chemical oxygen demand (COD) removal efficiency of 90% and a mean SO24 removal rate of 98.3% were reported, indicating efficient bioreactor functioning. At a COD: SO24 influent ratio of 8:1, then 3:1, in situ methanogenesis looked unaltered and was only moderately impacted when the cod: SO24 ratio was 1:2.

Methanogenesis is a biogeochemical process that involves the decomposition of organic materials in cold conditions and the release of methane, a strong greenhouse gas. Low-temperature anaerobic digestion (LTAD) has been used to cleanse wastewater and generate bioenergy using cold methanogenesis in designed systems. LTAD is the new biotechnology for wastewater treatment that offers an appealing alternative to traditional aerobic and anaerobic methods.

Only a few businesses have succeeded in achieving high-rate LTAD of sewage and industrial wastewaters at cheap capital and operational costs. Adoption across the water treatment industry would be a significant step forward, with significant benefits for climate change mitigation.

“We create, construct, own, and operate,”

explains a managing partner who has spent his entire career in agriculture and food production.

It would be a huge step forward if pathogens could be eliminated using efficient and cost-effective dry anaerobic digestion at low temperatures (20 °C and 28 °C).

After passing through a low-temperature dry digester, cow manure contains straw, which can be used as bedding. This renewable organic biomass source is long-term. In addition, manure is available all year on dairy farms. The presence of possible germs, however, makes it difficult to reuse.

If present research proves effective, a dry low-temperature anaerobic digestion method might be employed to produce methane and remove germs. Dry AD would give energy and cash to dairy farmers at the same time.

The majority of AD industrial applications have substantial heating costs. Because AD reactors are usually run at mesophilic temperatures while processing waste streams discharged at ambient or cold temperatures, this is the case. As a result, a low-temperature dry AD method that does not require heating would be a cost-effective wastewater treatment strategy. Furthermore, when dry AD is utilised, there is less of a requirement to release digestate.

The application of AD at cold temperatures, especially in northern nations, is an interesting option for improving the energy balance of AD. The temperatures in the northern countries are substantially lower than the process's optimum mesophilic temperature range.

South American researchers are aiming for a breakthrough in low-temperature anaerobic digestion. The potential of creating biogas under altiplano conditions has been demonstrated by studies on the decomposition of llama and cow faeces (low pressure and low temperature). Llama faeces has a lot of potential as a biofuel. A study is being conducted on the use of various feedstock mixes from the Bolivian Altiplano under low-temperature settings (18-25 degrees C).

In the European Union, the present municipal wastewater treatment model does not meet basic sustainability criteria. Indeed, it contradicts the proclaimed objectives of recent European Council policies on long-term growth.

The main technology in this disposal-based linear system is aerobic microbiology. As a result, aerobic activated sludge plants are used. The use of an aerobic system necessitates a significant capital investment and extensive use of fossil fuels. This also demands a high-tech operational control system and the production of vast amounts of sludge that must be treated before safe reuse/recycling can begin.

Bioelectrochemical Optimization of Biogas Production in LTAD at 10°C

According to science daily, a recent study undertaken by Concordia University researchers in collaboration with Bio-Terre Systems Inc. has shown possibilities for a type of anaerobic digestion that operates in low-temperature conditions (20°c).

The research, which was published in the journal “process safety and environmental protection,” looked at how psychrophilic bacteria degraded food waste at low temperatures. The approach provided equivalent methane yields as standard anaerobic digestion systems while requiring less energy to heat the bioreactors, according to the researchers.

When it comes to getting their products to local markets, small-scale animal farmers confront distinct hurdles. On-farm systems that combine inputs and outputs to retain nutrient and energy flow inside the farm are crucial to staying viable in shifting market conditions.

Low-temperature AD for wastewater treatment, AD is a cost-effective option.

To establish the ideal geometric parameters of the digester, the impact of selected geometric bioreactor characteristics on the performance of continuous-flow-type low-temperature biogas production from biomass by anaerobic digestion was investigated. Using model dairy effluent sludge as substrate, a continuous-mode two-stage bioreactor was used to produce biogas by anaerobic digestion. The Monod method was used to determine the appropriate diameter of the two cylinder-separated phases of the reactor for producing the most biogas per unit of time.

The following is the original article published in August 2014: 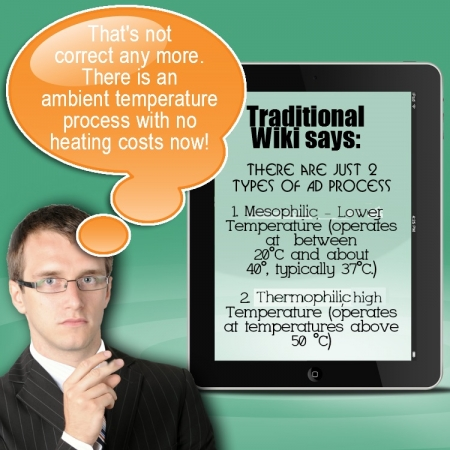 I was intrigued to see a newcomer with a stand at the AD & Biogas Association Exhibition and Conference 2014 last month at the NEC Birmingham.  NVP Energy was there to present their unique and innovative low temperature (< 20°C) Anaerobic Digestion (Lt-AD) wastewater (WW) treatment technology for low-strength effluent. And, yes! You did just read “less than 20 degrees Centigrade”, so this is a truly ambient temperature process for use in our cold northern European climate, without costly insulation and heating.

If you have ever wondered why so many digesters in the UK (mesophilic and thermophilic variety), are a lot less productive than those un-insulated anaerobic digestion systems which seem miraculously easy to build and operate in hot climates, it has got an awful lot to do with our climate being too cold, and the cost of heating!

So, how refreshing to find that a spin-off technology, from 15 years of microbiological lab and pilot-scale research at the National University of Ireland, Galway is now available for the Food & Drink WW industry; Municipal WW industry; Pharmaceutical WW industry and also ethanol processing WW industry; to treat their wastewater without the high energy (running) cost implications of current aerobic treatment systems.

Not only that, as this is an anaerobic digestion system, it is also a biogas plant.

Unlike traditional aerobic WWT systems, the Lt-AD technology recovers the carbon in the WW and transforms it into biogas. This means that the NVP Energy technology is a carbon-neutral and energy-positive technology which is good news for the environment not to mention your bottom line due to reduced carbon costs.

Anaerobic digestion is fast taking hold as the preferred treatment method of choice due to its clean green energy credentials, so this should be very attractive to the Food & Drinks industry and all other businesses producing similar effluents. 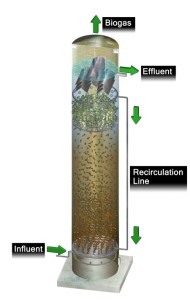 The NVP Energy process has been given the name of “Lt-AD technology” and they say that it can work equally well as a retrofit, an add-on technology to their client’s business expansion, or of course, can be the core technology treatment method in any new-build scenario.

For example, if you operate a Food & Drink plant that has an existing inefficient WWT system such as the activated sludge system, then their technology can:

On the other hand, if you operate a Food & Drink plant that elutes all your wastewater to sewer, then their technology can:

In both cases, the biogas that is produced is 100% available for reuse on-site to generate heat and/or electricity thus reducing your operational expenditure.

They say that the system will prove very attractive to Food & Drink plant operators that currently discharge their wastewater to sewers. Where this is the current disposal method they say that NVP Energy can significantly reduce the high trade effluent discharge costs that arise from the application of the “Mogden” calculation of TE Charges due to high chemical oxygen demand (COD) and total suspended solids (TSS) attenuation.

“For Food & Drink plants that treat their wastewater on-site, NVP Energy can considerably decrease their aeration costs. In addition, the Lt-AD technology can reduce organic sludge volumes by up to 90% when compared to the activated sludge process thus reducing sludge management costs.”

“The technology is very attractive as it has produced effluent which adheres to effluent release standards, e.g. Urban Wastewater Directive (UWWD) COD release standards, without the need for post-treatment. This is proven from our pilot-scale trials using our “low-strength” effluent definition, a type of effluent that will apply to very many businesses”.
Benefits are listed as: 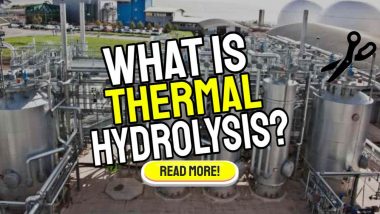 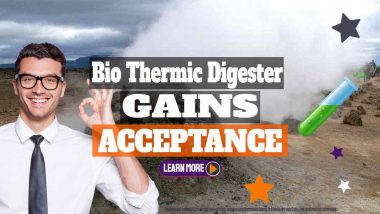