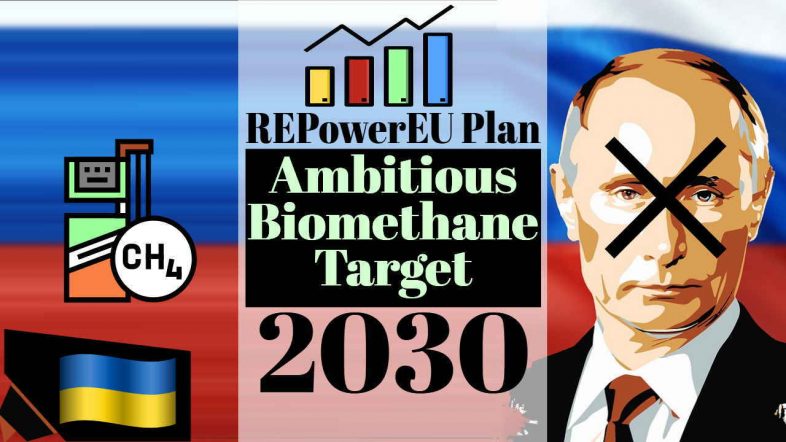 What is the REPowerEU Plan?

The majority of European citizens believe that the EU should reduce its dependency on Russian gas and oil as soon as possible to support Ukraine. By acting as a Union, Europe can achieve this faster.

The European Commission published this plan on Wednesday 18 May 2022 setting out how the European Union can eliminate its dependency on Russian fossil fuels.

The REPowerEU plan sets out a series of measures to rapidly reduce dependence on Russian fossil fuels and fast forward the green transition while increasing the resilience of the EU-wide energy system.

The EU is working with international partners to find alternative energy supplies. In the short term, the EU Nations need alternative gas, oil and coal supplies as quickly as possible, and looking to the future they will need renewable hydrogen too.

By looking at the biomethane action plan it is clear that there will be a greatly increased role for the Anaerobic Digestion Process throughout Europe.

A Biomethane Action Plan outlines tools such as a new biomethane industrial partnership and monetary support to increase supply to 35 billion cubic metres (bcm) by 2030, including through the Common Agricultural Policy. … via ec.europa.eu

The adaptation of existing gas networks to bio-methane and renewable hydrogen will be required as part of the development of biomethane production and infrastructure. 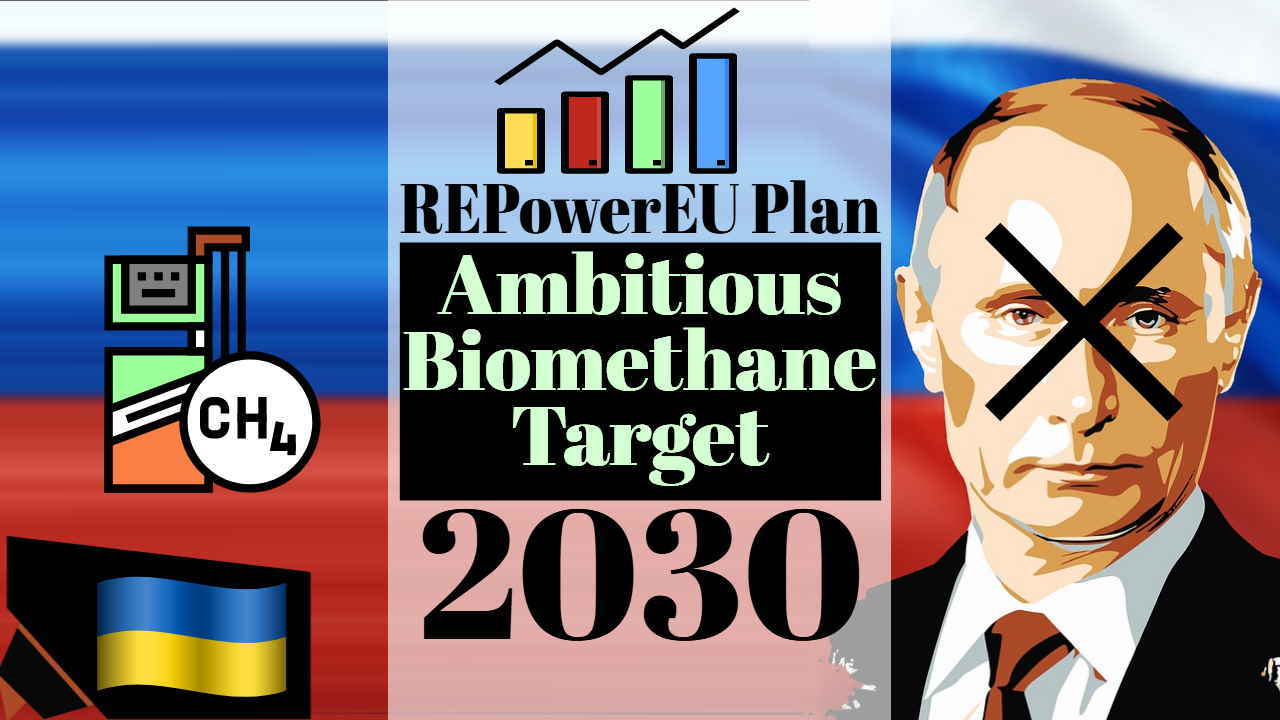 Why Aim for this Massive Increase in Biogas to Biomethane Output?

It is easy to see why the EU has gone for renewables, and in particular, for biogas to biomethane production:

REPowerEU will speed up the green transition and spur massive investment in renewable energy.

The plan also includes the need to enable industry and transport to substitute fossil fuels with renewables faster, driven by the separate need to bring down emissions and dependencies.

Ending the EU's reliance on Russian fossil fuels will not only require a massive scale-up of renewables. Faster electrification and replacement of fossil-based heat and fuel across all industries will also be needed. This will have to include the construction industry and the transport sector.

But, the silver lining will be that the clean energy transition will help lower energy prices over time and reduce import dependency.

Target to Cut Europe's Dependency on Russian Energy by 2027

This comprehensive policy package promises to cut Europe's dependency on Russia as quickly as possible – and no later than 2027 – via a range of short and medium-term measures.

By acting together, the European Union can optimise its response to the energy crisis in all scenarios but each country will have to make concessions.

Consequently, the new plan, known as REPowerEU, focuses predominantly on how to undertake an orderly and affordable phase-out of Russian gas by 2027.

What if Russia Acts First and Cuts Supplies?

REPowerEU also proposes EU-level backstop options in the face of the plausible risk of a sudden interruption of Russian gas supplies, particularly after the supply cuts to Poland and Bulgaria. However, the economic pain would still be severe.

What Does the REPowerEU Plan Include?

This plan should see Europe end its reliance on Russian energy by 2027, while also accelerating its green transformation. And this would be economically beneficial for Europe.

The European Commission estimates that delivering REPowerEU objectives requires an additional investment of €210 billion between now and 2027, but this would save almost €100 billion per year in reduced fossil-fuel imports.

Achieving these goals will require a combination of short, mid-term, and long-term targets and measures covering the following three pillars:

The timeline and level of ambition are such that the speed and scope of action will have to go far beyond the already ambitious proposals outlined to date, for example under the ‘Fit for 55 Package' and the ‘Hydrogen and Decarbonised Gas Market Package'.

“The cheapest energy is the energy you do not use”, was the message of Mr Timmermans at the readout of the Commissioner meeting on May 18 2022.

Avoided demand and energy efficiency measures are not only the most cost-effective measures, but also the most sustainable, secure, and the most immediately actionable response available.

But the scale of the changes the Plan sets out to achieve when you consider that the EU Member States pay roughly €1 billion [Euros] per day to Russia for fossil energy deliveries at the exceptionally high current fossil energy prices.

All efforts to reduce fossil fuel use are much needed, and the plan includes a number of good proposals on energy efficiency and renewables. However, there are also some black spots hidden in the details that risk undermining the EU's transition to a 100% renewable and nature-friendly energy system.

Even with aggressive energy demand reduction in the short-term, and mid to long-term plans for a near-totally decarbonised energy system, there will be a requirement for fossil fuels from non-Russian partners.

The EU's push for importing renewable hydrogen may become a concern to countries in the global South. They are said by at least one expert to be under increasing pressure to use their renewable energy for hydrogen production to be exported to meet European climate goals, rather than meet their own clean development needs.

Potential Negative Environmental and Economic Consequences of the REPowerEU Plan

There are also proposals to replace Russian oil and gas by:

These risk prolonging the EU's dependence on fossil fuels and as a consequence jeopardising climate and nature targets.

To finance the plan, the Commission is proposing to mobilise EUR 300 billion, mainly from the already existing EU Recovery Fund.

Only EUR 20 billion would constitute “new money”, which would be generated through the selling of new permits to avoid the industry emitting carbon to the environment – representing 250 million tons of CO2, which would directly damage the EU's emissions reduction effort in the ongoing “Fit for 55” negotiations.

Our view, as supporters and promoters of the anaerobic digestion process, is that the increased investment in biogas production, which will be upgraded to biomethane and directly replace Russian natural gas imports, would have been a positive move even without Russian aggression.

But, we also concur with the following statement (while not understanding the reticence in including bioenergy in her welcome list):

“The Commission's plan to accelerate the EU's shift to clean energy solutions such as energy efficiency, wind and solar power is very welcome,” said Ester Asin, Director of the WWF European Policy Office. “But financing this by selling pollution permits is misguided, as is building more fossil gas infrastructure or relying on increased biomass use. That will just prolong our dependence on fossil fuel imports and jeopardise climate goals.”

The plan rightly emphasises the need for a huge expansion in solar and wind, in addition to raising biomethane output. It has also been complemented by an amendment to the revised EU Renewable Energy Directive which is currently being negotiated.

The REPowerEU plan is a very positive one for the biogas industry in Europe.

In short, it proposes measures to: 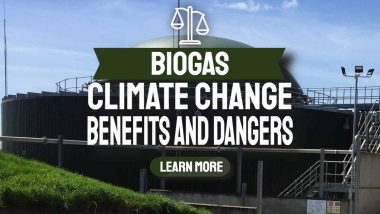 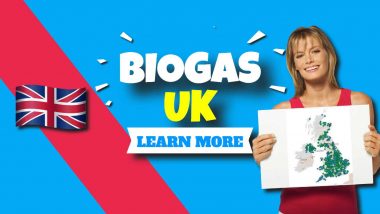