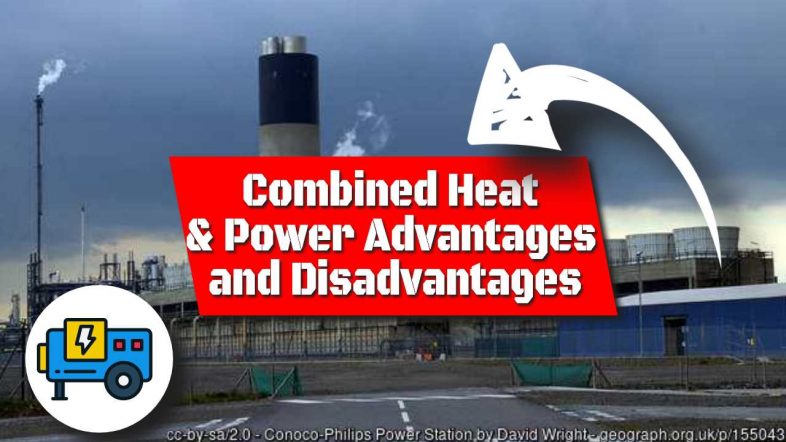 Combined heat and power advantages and disadvantages are now under the spotlight like never before. This comes from the recent realisation that producing renewable energy alone will not be enough to fully abate climate change and avoid global damage.

This article discusses the pros and cons of this type of system.

Read on for our perspective on the CHP pros and cons debate:

What is Combined Heat and Power

A combined heat and power (CHP) system, or “cogeneration”, is the use of a heat engine or power station to simultaneously generate electricity and heat (usually as steam or hot water) which is also used.

Hospitals, universities, manufacturers and other large electric users have found that producing electricity and usable steam (collectively, combined heat and power) in their own internal power systems may provide them substantial economic and operational benefits.

Add a local Energy from Waste (EfW) (e.g. Municipal Waste Incinerator) plant into the equation and local heat users such as homes, schools and offices, and the cost of the CHP energy to users can easily be normal domestic electricity and natural gas rates.

“one of the most promising options to increase energy efficiency in the United States.”

CHP technologies, also known as cogeneration technologies, raise efficiency through the capture and utilization of waste heat produced during the power generation process.

For example, if you heat your home with a natural gas boiler, you will lose some of the energy you could put into the home when the outward flowing gas fumes turn (condense) into steam in the vent pipe from your boiler.

Although it is not called CHP, modern condensing boilers do use a form of a CHP system by collecting the hot water droplets while still inside the boiler and also with them the heat of condensation is also used to warm your home. By increasing efficiency and managing costs, society Increases the resiliency of our energy infrastructure by limiting congestion and offsetting transmission losses

This allows CHP systems to use less fuel than would be required to operate separate heating and power systems. Despite the fact that CHP is a proven and effective source of energy, the report, titled “CHP: effective energy solutions for a sustainable future,” said CHP technologies remain one of the most underutilized sources of energy in the country.

The use of mainframe gas turbines for power generation has increased in recent years and is likely to continue to increase. The proportion of power generation using combined heat and power is also growing mainly due to efficiency improvements and environmental benefits.

Maintaining optimal building temperatures is not only key to tenant comfort and productivity but also improves the efficiency of energy production, reduces utility costs, and decreases carbon emissions.

Combined heat and power (CHP), or cogeneration, is the one technology that can hit the mark on all these needs.

4. May Help to Cushion Price Rises

5. CHP Can Make More Efficient Use of Scarce Renewable Energy

Combined heat and power (CHP) systems use energy from multiple sources to produce electricity. CHP systems that produce hot water from renewable energy sources it is a form of renewable energy.

A renewable CHP and power system can be built using a variety of green sources, including biomass, solar, wind, hydroelectricity, geothermal, nuclear and landfill gas. The biggest of the efficiency benefits comes from using a renewable energy source. 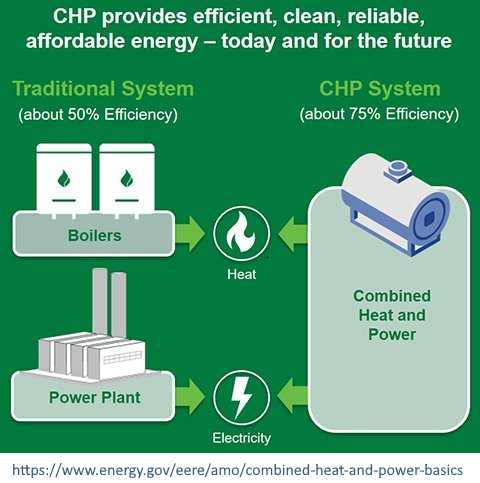 But CHP sourced from fossil fuels such as NG, coal, oil etc., are still worthwhile as they use heat that would otherwise be sent to a cooling tower or another cooling device. The purpose of these is simple to cool the water that keeps the generator from overheating.

In cooling systems which include those huge cooling towers at large power stations, the heat is sent into the surrounding environment without achieving any useful purpose.

In a CHP system instead of warming the air around the power station or generator, the cooling is done via heat transfer into hot water pipes through which it is pumped to homes and businesses and, for example, is used to heat central heating radiators.

A typical CHP system has a gas turbine generator and an integrated heat recovery steam generator and those increase the energy efficiency.

A CHP System Reduces the Amount of Fuel Needed

The gas turbine can also be used to heat the building that houses the power plant if it uses biogas or biomethane to generate energy.

The CHP system lowers the quantity of fuel used to run the plant, increasing its efficiency. 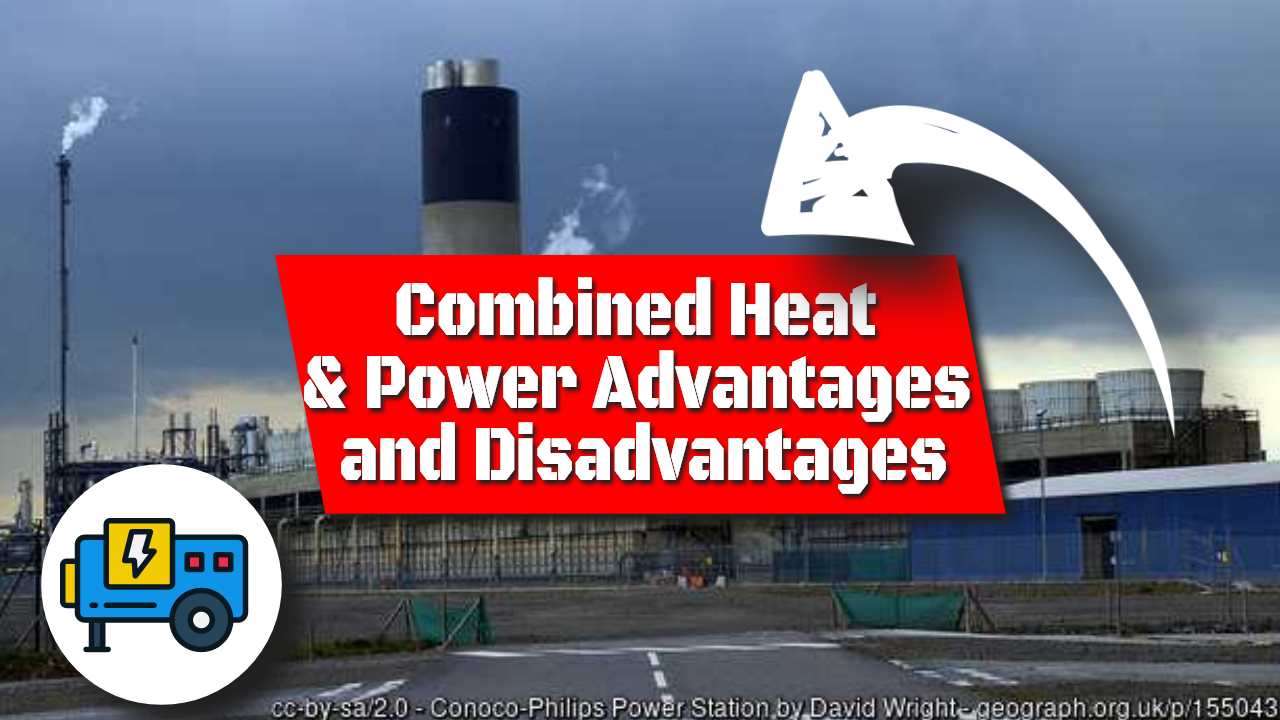 It Reduces the Carbon Dioxide Released into the Atmosphere

CHP systems can also reduce the amount of carbon dioxide released into the atmosphere. CHP does not contribute to the pollution that occurs when electricity is generated by burning fossil fuels.

In some cases, the heat from the gas turbine can be used to heat water for domestic purposes.

Another benefit of a CHP system is that it can help to reduce the cost of electricity. It helps to offset the cost of operating the plant, which is passed on to customers. Combined heat and power systems are becoming increasingly popular because of their potential to reduce costs and emissions. Many governments are offering incentives to encourage the installation of these systems.

Financial benefits: CHP systems reduce energy costs and can deliver savings of up to 40% while offering a permanent reduction in energy costs.

On balance, CHP systems are a great alternative to traditional systems. They are cheaper, easier to maintain, and more predictable.

Disadvantages of Combined Heat and Power

There are also disadvantages to using a CHP system.

1. It takes longer to build a CHP system

One disadvantage is that it takes longer to build a CHP system than it does to build a traditional system.

2. The initial cost of installing a CHP system is high

Another downside is that installing a CHP system may be more expensive than installing a regular system. However, during the first few years, when any loans taken out to pay for the CHP equipment are paid back by the savings, the costs of thermal energy normally drop dramatically.

Traditional systems are also more expensive to maintain than CHP systems. Because CHP systems have more moving parts than typical systems, this is the case. To keep these moving elements from breaking down, they must be maintained.

In high-density areas where the necessary heat-insulated hot water pipelines can be installed relatively cheaply between the waste heat source (AD plant, conventional power station, incinerator, or landfill gas EfW plant) and the users, the economic benefits of CHP can be significant.

For example, in the Data Center Sector, the usage of CHP technology is a real and feasible consideration for reducing greenhouse gas (GHG) emissions.

It joins a number of other initiatives, including a practical path for reducing greenhouse gas emissions in existing data centres and building net-zero GHG new data centres by 2030.

A recent conference looked at the huge savings in energy expenditures, CO2 emissions, and carbon taxes that CHP technology can bring, as well as the security and reliability of power that on-site power generation can provide.

CHP is an excellent thermal energy solution for enterprises with high energy demands, notably in Ireland.

Electricity costs for major industrial and commercial clients in that country are among the highest in Europe. The exploitation of this unused energy source would lower total energy costs.

Manufacturers Recognise the Advantages of Combined Heat and Power 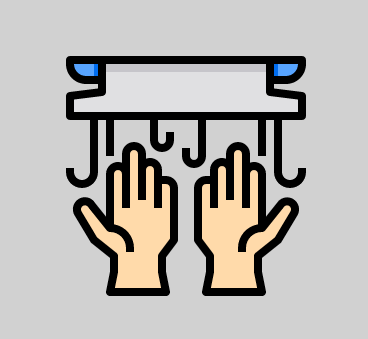 According to a new poll by Aggreko, UK firms are increasingly recognising the benefits and possibilities of combined heat and power (CHP) technology post-pandemic.

Over 90% of respondents to a survey conducted by a temporary equipment supplier agreed that they could see the possibility of CHP in their organisations by 2020, confirming the technology's potential.

From a single fuel source, CHP facilities can supply on-site electric generation, heating, and cooling. Cogeneration is another name for this power generation technique. The waste heat produced by conventional power plants is not always usable.

A larger proportion of the inherent energy in the fuel is converted into electricity or useful heat in a “combined heat and power” plant (“CHP”). When the heat is not needed, no electric power would be generated using energy-efficient building controls. (r-CHP) residential or commercial low-temperature heating; electric power is primary. This is usually an electric generator (for example a large central steam turbine, or smaller gas turbine), which releases high quantities of relatively low-temperature waste heat. While the traditional method of separately producing usable heat and power has a typical combined efficiency of 45%, CHP systems can operate at efficiency levels as high as 80%.

CHP is a cost-effective, energy-efficient instrument that creates electricity while recovering heat that would otherwise be squandered as thermal energy.

CHP systems are proving to be an efficient and effective approach to reduce waste. A cogeneration system, often known as a CHP system, is a basic concept that simply requires a heat exchanger at each end of a heat-insulated pipe.

Micro combined heat and power, also known as micro-CHP, chp, or MCHP, is a type of cogeneration that applies to a single/multi-family home or a small office building with a capacity of up to 50 kW. 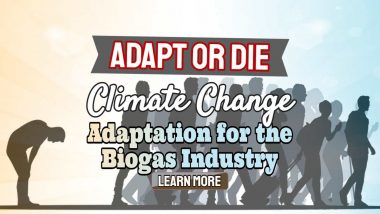 Adapt or Die – Climate Change Adaptation for the Biogas Industry 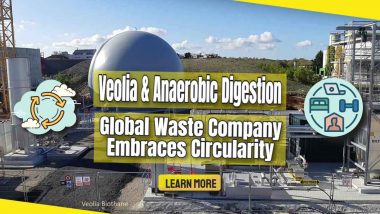