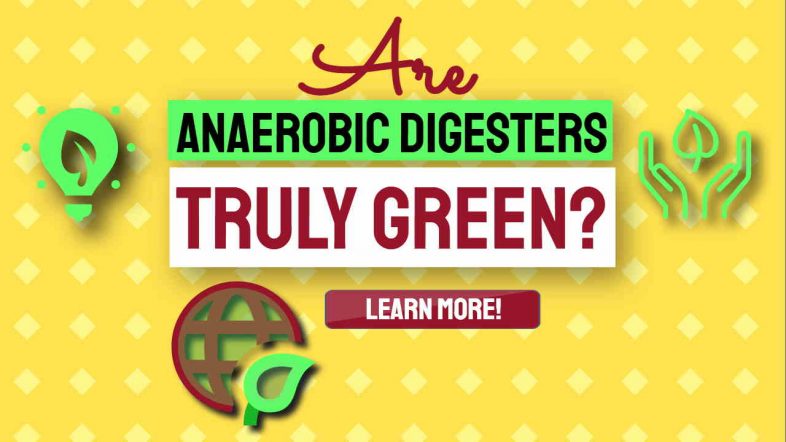 Are Anaerobic Digesters Truly Green and How Do They Work?

Anaerobic digesters are a popular alternative energy technology and their use is growing, but are they as green as their promoters would suggest? In order to discuss this, we also include information on how they work as the claims of climate reduction are really quite remarkable and need detailed explanation in order for our readers to understand them.

Many respected bodies including the US EPA support the use of anaerobic digesters and the production of biomethane to combat climate change, but they're not without controversy.

In the next section we explain the controversy:

The Current Biogas Industry Uses Waste and Not Food

A few years ago, when the German government was still strongly subsidising biogas production from food crops, there were many doubts voiced about the technology and its possible effect on food prices.

But since then the use of food to feed digesters has been almost eliminated by the removal of subsidies and the great majority of environmentalists now support the development of waste-fed anaerobic digestion globally.

The fact is that the Anaerobic Digestion (AD) industry uses almost entirely waste organic materials (biowaste) and is not significantly consuming food.

The Environmental Defense Fund and World Wildlife Fund are notable among those organisations considered to be independent of influence by the biogas industry or “big agriculture” that supports the use of anaerobic digesters. 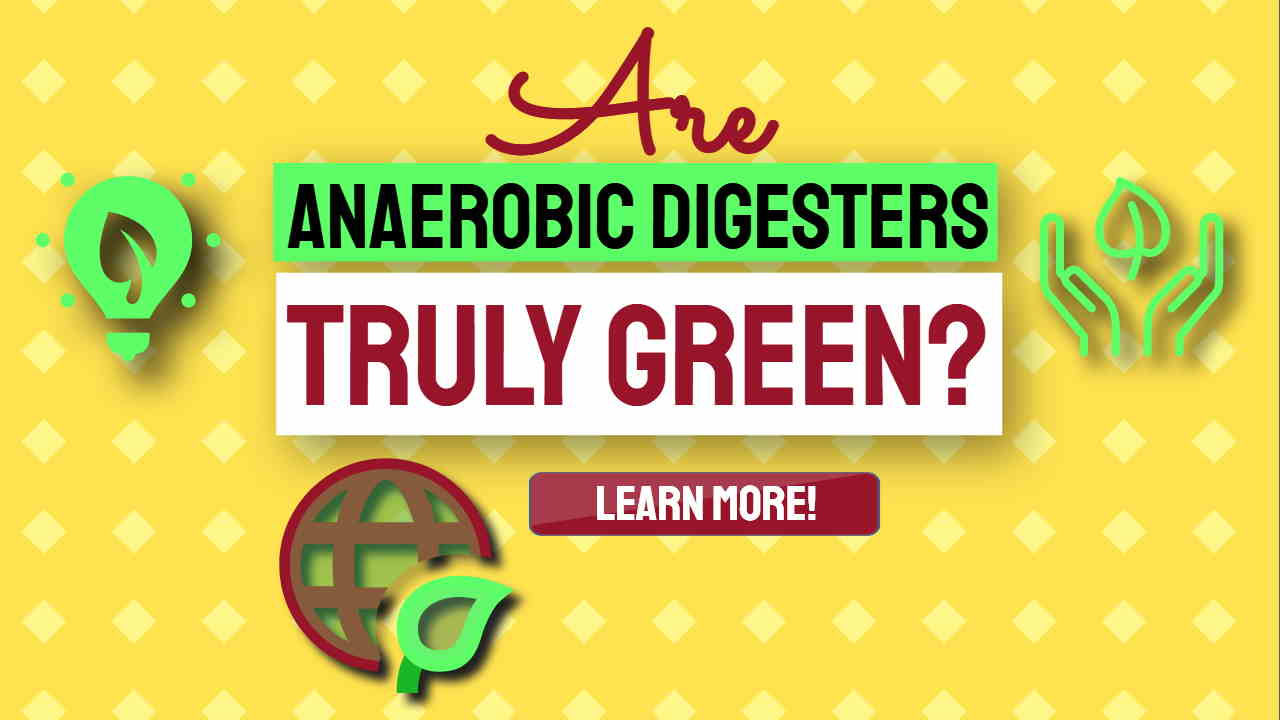 Food and Water Watch and Others Accuse AD Industry of Greenwashing

One or two others, like the non-profit Food and Water Watch (FWW), continue to accuse their governments of greenwashing factory farming and subsidizing the practice.

To these objectors’ natural gas “renewables,” like “biomethane,” are essentially no better than a greenwashed, cleaner-sounding moniker for processed biogas that may be transported in pipelines. To those people, anaerobic digesters are a danger because they create methane which will then, they argue, leak out.

Nobody would deny that any form of methane leakage into the air tends to negate the beneficial effects of climate change reduction. If enough methane was to leak, the environmental benefit could be completely negated, or worse.

The FWW give a figure of 3% a loss in fugitive methane emissions (gas leaks) as the concentration which would counterbalance the good for the atmosphere that biogas digesters offer.

Danish Research Shows Biomethane Benefits are Not Negated by Leakage

So, we did some research on the published data and we found the commonly quoted scientific assessment of the balance of methane benefits versus leakage rates. These are figures that the biogas industry quotes and they are below a 3% loss.

Our evidence is to be found in a recent Danish government-funded report which uses the research paper chart provided below. From the above chart, to cancel out all the benefits (below the horizontal axis) a methane leakage of above 10% would be needed.

In a recent extensive Danish “methane leakage investigation”1 actual leakage was found to be about 2.5% according to a paper presented to the World Biogas Association in Spring 2022.

This study showed that a few biogas plants had an unexpectedly high methane leakage rate. This is seen as the main contributor to this high figure. When the operators of those plants were shown the results of the study those operators reportedly very rapidly instigated simple operational maintenance measures to reduce their high methane emissions.

The intention of the Danish biogas industry is to reduce all such accidental methane emissions to below 1% in the next few years.

However, in many nations, their national biogas associations have yet to set targets for reducing the leakage rate of methane from their biogas digesters. That must be a concern, as other countries will most likely also have just a few poorly maintained biogas plants being operated badly. As seen in Denmark, a few poorly run digesters can have a disproportionately damaging effect on a nation’s national fugitive AD plant gas leakage performance.

Nevertheless, according to Food & Water Watch (FWW) the greenwash problem goes further for “renewable” natural gas. Biomethane production in the anaerobic digestion process is, to them, just one example of the systems which are said to reduce climate change, while doing the opposite.

According to these critics, biomethane is being misrepresented as a green energy source and as renewable by those who favour it.

FWW argue that society will only perpetuate the fundamental problem if it relies on symptoms of climate change as a treatment.

Methane is the primary component of biogas. Nobody would deny that methane (CH4) is the same greenhouse gas that makes up fracked natural gas. Methane waste gases from landfills (Landfill Gas), sewage treatment plants, and cattle industrial farms are all included in a category of symptoms of climate change according to FWW.

But it is not clear how these emissions can be avoided by big agricultural companies, or small ones either unless this gas is utilised and managed responsibly. Nature will create this methane in any event in farms small and large, but the biogas industry provides the means by which these emissions can be managed and prevented.

While some, like the FWW, still hold out against the development of digesters their view is not considered valid by the great majority of the scientific community.

The intention of all involved in the global industry is to consider the compliance with the Net Zero Carbon emissions targets of primary importance, these are primary drivers for AD. It is also important to note the economic benefits of digester technology, now that energy costs have doubled in the post-pandemic period, and far outweigh the environmental and health risks.

How Do Anaerobic Digesters Work?

Anaerobic Digesters produce biogas. Biogas is a natural resource that comes from the breakdown of organic matter. This process produces biogas, a mixture of methane and carbon dioxide with trace amounts of other gases.

Depending on the feedstock and how it is managed, the gas can be used in numerous applications. The process is environmentally friendly, it makes renewable energy and can reduce greenhouse gas emissions.

Anaerobic digesters are enclosed structures that use methane-forming microorganisms to process organic matter. The result is biogas, which can be burned for energy and electricity. Under certain circumstances, methane can be purified into natural gas-grade biogas known as biomethane.

This is a great renewable energy source, but a valid criticism is that digesters require a lot of ongoing maintenance to ensure their efficiency. An advanced high-rate anaerobic digester can produce double the quantity of biogas but when things go wrong the effects are worse in these more rapid processes. The result is that the stability of such plants is lower.

Farm-scale anaerobic digesters can be built to accommodate the manure slurry produced by the management of stock in barns. The economies of scale mean that the larger the farm, the more profitable a biogas digester will be. The design of small-scale biogas systems frequently differs from that of larger-scale systems to keep costs low.

The different types of agricultural anaerobic digesters include:

The Anaerobic Digestion Process is a digestive system that utilises anaerobic bacteria, bacteria that live without the need for oxygen.

Bacteria break down organic matter, such as food waste, without the use of oxygen in anaerobic digestion. The biogas produced by the bacteria as they digest food waste rises from the bottom of the digester. Methane, the major component of natural gas, makes up the bulk of this. To generate a nutrient-dense organic fertiliser, solid and liquid waste which flows out of anaerobic digesters is used.

If you think of it as a large stomach, it needs frequent feeding and well-balanced food is a key requirement, just like for any other stomach to perform well. The food must be prepped before the organic portion is fed into the digester tanks and any packaging removed to supply the germs with the perfect recipe.

The bacteria which perform biogas manufacture occur in a variety of forms and sizes, with subtle variations among them. To ensure that the micro bacteria are well-fed and efficient, it can be necessary to add components such as manure or other trace elements to a pure food feedstock. These may include chemicals such as phosphorus. Maximizing energy recovery from food waste can be achieved by ensuring that this is done correctly.

What is Biogas as a Mixture of Gases?

Methane (CH4) and carbon dioxide (CO2) are the primary components of biogas (CO2). CO2 and CH4 are both climate pollutants, but CH4 is significantly more destructive and is responsible for around 25% of present global warming, whereas CO2 lasts hundreds of years in the atmosphere.

Biogas, also known as biogenic CH4 or renewable natural gas, can be treated to a concentration of around 95% CH4 (RNG) or higher. While burning biogenic CH4 produces CO2 emissions. The CO2 emissions are generally considered climate-neutral because the biogas is generated from plants (which naturally remove CO2 from the atmosphere) and hence contribute minimal fossil carbon to the atmosphere.

Biogenic CH4 gas from landfills, farm slurry lagoons, animal feeding facilities, and other existing sources can be avoided by using a digester in which the methane otherwise bubbling up and escaping to the atmosphere is captured and used to reduce greenhouse gas emissions.

Even if the CH4 capture isn't flawless, the overall reduction in CH4 emissions makes up for any flaws. It can also help the environment by avoidance of fossil fuel use when the renewable methane is burnt instead of that amount of fossil fuel. This has the effect of minimising the consumption of fossil fuels when biomethane is used as a fuel.

However, all biogas plant operators must apply a high standard of good practice within their maintenance procedures, or as has been found during a recent Danish biogas plant methane leakage study, a few leaky AD plants can easily negate much of the GHG reduction benefits of these facilities. 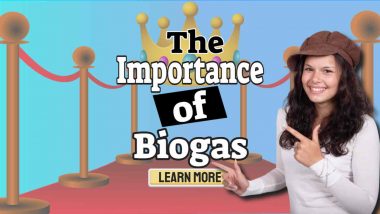 The Importance of Biogas to Big Cities and Rural Villages 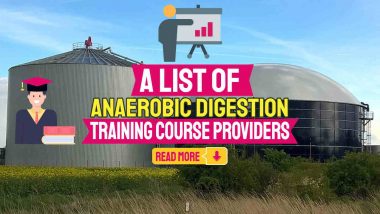