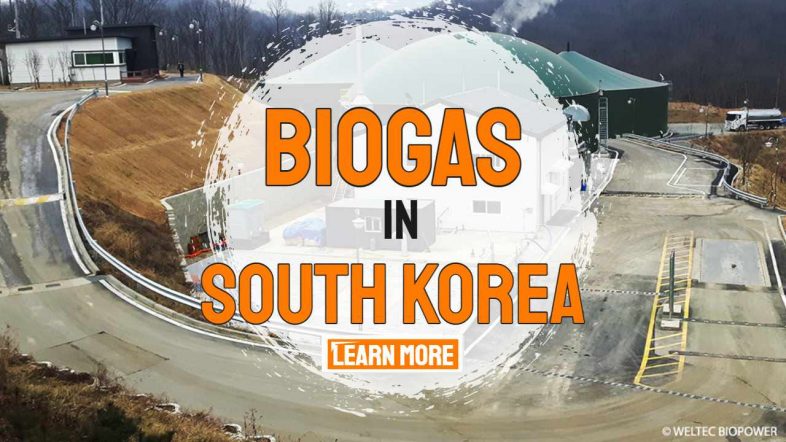 The prospect for Biogas in South Korea is looking up! Since President Moon Jae-in took office, the prospects for anaerobic digestion in South Korea have increased. The government has been making strenuous efforts to attain autonomy in the electricity and heat sectors, as well as to considerably expand the percentage of renewable energies.

Increasing the development of anaerobic digestion (AD) and biogas in South Korea is one way to help the nation comply with global decarbonisation pledges. He is thought to be likely to encourage biogas developments as a result.

Also, A “green new agreement” was recently launched in order to achieve net-zero carbon emissions by 2050.

Status of biogas technologies and policies in South Korea

With the announcement of the Green New Deal, the goal of achieving zero net carbon emissions by 2050 has been reaffirmed. According to Weltec, South Korea will be the first East Asian government to establish a deadline for ending its role in climate change.

According to reports from 2012, there were around 49 biogas facilities in South Korea (SK)that were widely regarded as economically and technically failed owing to a lack of know-how. According to a study article, inefficient technology and regulations were only one of the causes behind this. The researchers identified a need to examine the state of biogas technology and policy in the country through the eyes of an outside biogas specialist.

Move on to 2021 and there is plenty of news of non-South Korean Biogas Plant Contractors building plants in the nation.

BioGest has extended its Asian references with a 190 kW agricultural & food-waste2energy-plant.

In February 2021 Biogest received an order to build an agricultural and food waste biogas plant in the southern region of SK. The project, which is located close to Daegu, has been developed in cooperation with HC Energy and Dobangyukjong Farm and is supported by the Changnyeong-gun City Office. 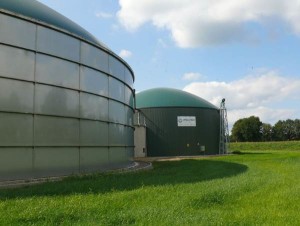 The plant is located close to a pig farm and the inedible food will be delivered from an organic waste collection point.

Energy may be generated in both electric and thermal energy forms. In the process, 13,000 tonnes of animal waste, mostly from pigs, and 5,000 tonnes of food waste are converted into high-quality organic fertiliser. Furthermore, the pig farm's air quality may be enhanced.

The city hopes that the Biogest PowerRing Biogas Plant will be an important reference plant to attract further local projects. These will raise the amount of energy supplied by this renewable energy source.

Waste Water of Cargo Ships is Now Made into Biogas

The biogas liquefaction market is expected to grow due to its advantage over other compressed gas and has a lower rate of wastage produced. Liquefied biogas burns out more clearly and cleanly, which emits a lower amount of carbon dioxide (CO2), thus, in turn, helping to control the global environment and pollution.

In autumn 2020 Weltec biopower began building a 7 MW biogas plant in South Korea. The plant is being constructed in the province of Gyeonggi-do, 60 kilometres north of the capital, Seoul, and will convert biogas into heat via an integrated gas boiler. It is hoped the plant will go live in spring 2021 and digest up to 93,000 tons of food waste annually, some of which will come from local households. Weltec said since President Moon Jae-in assumed office, the government has been making “concerted efforts” to achieve autonomy in the power and heat sector and significantly increase the share of renewable energies.

In the construction of this contemporary Gyeonggi-do facility Weltec designed two new-generation duplex steel digesters with a capacity of 6,200 cubic metres (m3) and 2,700 cubic metres (m3), respectively, “to meet the specific needs of the site”, said Vladimir Bogatov, Sales Manager for Asia. “The tanks are 8.8 m high due to space constraints on-site and municipal restrictions.”  Including two duplex steel digesters of the newest generation.

Plant in South Korea to Produce Heat from Food Waste

Sweden is helping South Korea to convert food waste into biogas, to increase the biogas market and try to close the expanding energy gap.

In an urban society, food waste poses both problems and opportunities.

Odour, space for landfilling, leakage of nutriments and emissions of greenhouse gases are among the problems that can be identified whereas the possibility to generate fossil-free energy in the form of biogas and the ability to recirculate nutrients from the waste back to agriculture are among the possibilities.

In Korea, Scandinavian Biogas Fuels AB (SBF) has been operating a biogas production facility in the city of Ulsan in a build-operate-transfer project(BOTt) since 2010. A new food waste reception and pre-treatment facility were constructed to be able to increase the amount of food waste treatment capacity from 12 000 to 60 000 tons per year.

The Following is our Archive Article first published in 2015

I researched the web to find out how many biogas plants they do already have in S. Korea (Korea) and found that there is a free AD report on the IEA Energy Technology Network website, dated October of this year that puts the total number of biogas plants in 2014 (not including landfill sites producing energy from landfill gas) at 71.

They do tell us that it is being built for a transformer manufacturer, which must make for an unusual client given that it is not clear what organic waste the client would be produced in-house to feed this new digester.

There is apparently a lot of potential for further anaerobic digestion plant projects in South Korea, judging by the size of the population of about 51 million (according to Weltec).

The building of an AD plant from the German firm WELTEC BIOPOWER began in South Korea in October 2015, with the unit scheduled to be completed in 2018. The facility is located in the province of Gyeonggi-do, approximately 80 kilometres north of the capital Seoul.

The 450-kilowatt biogas facility is scheduled to go into operation in the early summer of 2016. The highly developed technology combined with intelligent control will ensure that the second WELTEC facility in SK operates at peak efficiency.

According to the company, both plants have a high degree of plant availability and profit.

Major investments are being made in the energy industry in South Korea, and the development of renewable energy sources has been a primary focus for the country for some years now. For good reason: the country, which has a population of 51 million people, is one of the world's top ten users of electricity. However, because the country lacks large fossil fuel resources, it is compelled to import 97% of its traditional energy sources from other countries.

One of the factors that drew the interest of the transformer maker, which will serve as both the investor and operator of the new biogas plant, was the fact that the German plant manufacturer had already constructed a biogas plant in the country's southern region back in 2012.

However, the ultimate decision in favour of WELTEC was based on the fact that the technological plant idea for the new project has been customised to meet the specific demands of the region as well as the environmental objectives of the nation.

According to Harro Brons, project manager of WELTEC BIOPOWER, the sustainable waste disposal idea, as well as the effective processing of the input components into high-nutrient fertiliser, were critical aspects in the success of the project.

Starting in the early summer of 2016, the operator will provide the stainless-steel digester, which has a capacity of about 4,000 m3, with 100 tonnes of biowaste per day, of which 70% will be pig manure, starting in the early summer of 2016. AD will be used to transform this feedstock into biogas and high-quality fertiliser, which will be used for agricultural purposes.

Following that, the fertiliser will be kept in two stainless-steel digestate storage tanks with a combined capacity of 5,590 m3 until it is needed. Because of the biogas being produced, a combined heat and power plant with an electrical output of 450 kilowatts will be able to function.

The electricity will be routed directly into the electrical grid. The heat will be used for a variety of purposes, including heating the company's facilities and internal processes.

The technology that has been used is without a doubt the key to the outstanding performance of this biogas plant, not least in ensuring uninterrupted heat supply.

The optimal function of the components in SK will be regulated by the LoMOS control, which is a PLC-based system designed specifically by WELTEC. The precise plant control makes it possible to achieve a high degree of automation as well as the best possible remote maintenance.

Substrates will be automatically injected from pre-storage into digesters via a control system to ensure continuous heat delivery. Ensuring an uninterrupted heat supply is very important to SK.

A specific aspect has been considered in order to create the user interface as user-friendly as possible: “For this project, we developed the control in Korea,” explains Harro Brons.

As a result, the groundwork has been laid for the seamless functioning of the plant and the initial steps toward the achievement of South Korea's energy objectives. It is hoped that the supply of anaerobic biogas plants will be further spread in Korea. 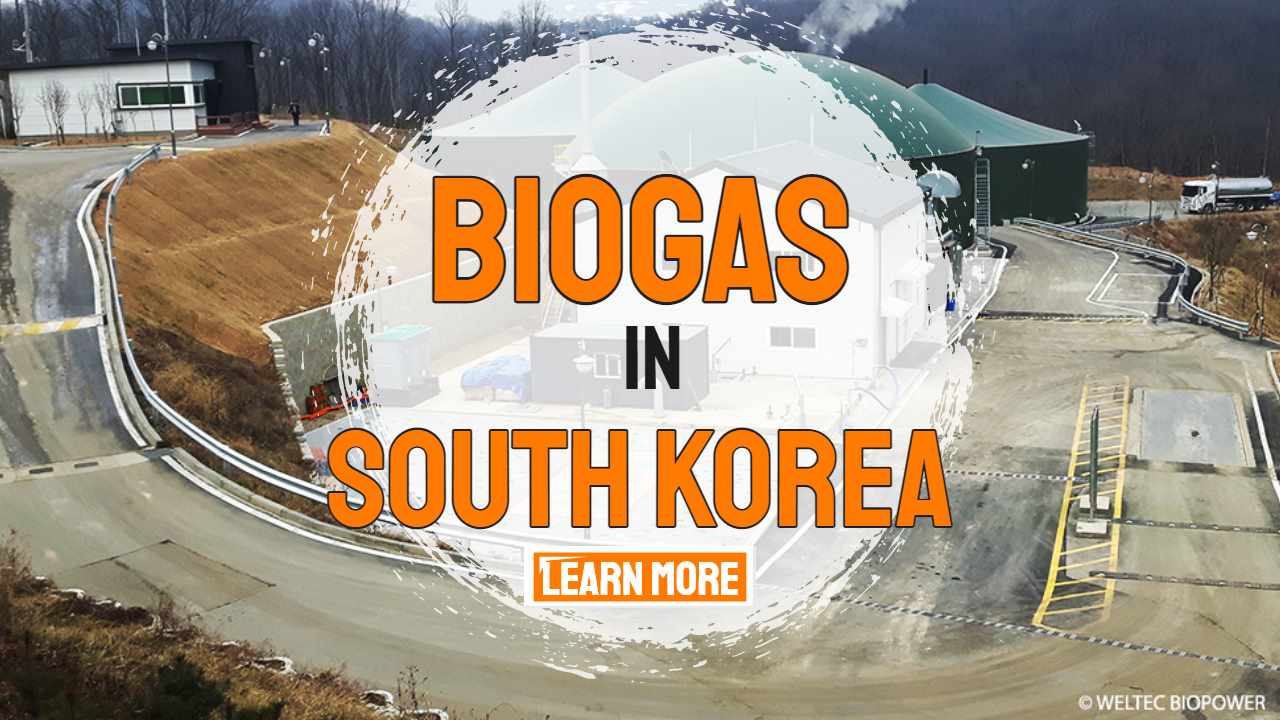 Weltec has done it again! They have been given repeat business, this time in France. See our article about it here. 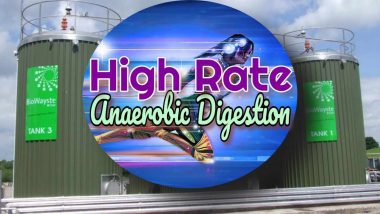 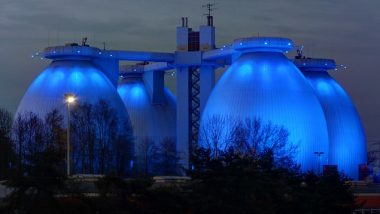