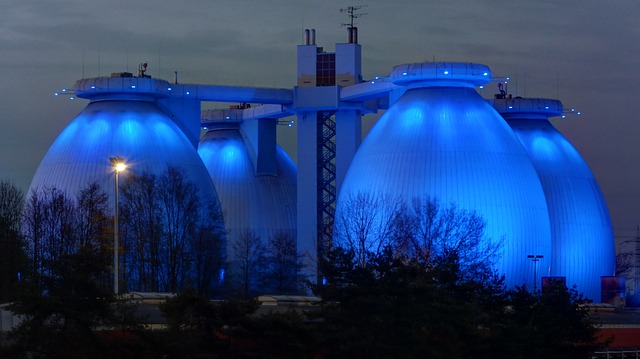 Egg Shaped Anaerobic Digesters; Enormous eggs! Whatever next! Have you ever wondered what those huge “strangely other-world like” not quite “spherical” tanks are that you sometimes see?

They are anaerobic digestion process digesters, and very useful they are too!

They make sewage sludge much more wholesome and in particular, they reduce sludge odour, but best of all they make large amounts of renewable energy to power the sewage works they form part of.

If you found our video interesting, now read more about sewage sludge at our main website.

This video was inspired by the presentation on egg-shaped digesters at: mebig.marmara.edu

Plus, many of them export their “green” electricity to the local power grid. The egg shape looks really quite strange but it provides for good mixing.

Quantitative studies of two mixing techniques and two digester forms revealed that mechanical draught tube mixing is more efficient than external pumped recirculation, and the egg shape is more efficient than the cylindrical design. The best main pumping mode and the optimal position of the mixer propeller attached inside the tube were determined through testing.

Origins of the Egg Shaped Digester

Egg-shaped digesters originated in Germany in the 1950s and it is thought that all are used to treat sewage works sludge.

Design features are many, as follows:

More Information About Digesters Around the Web

A biogas digester (also known as a biogas plant) is a large tank where inside Biogas is produced through the decomposition/breakdown of organic matter through a process called anaerobic digestion.

It’s called a digester because organic material is eaten and digested by bacteria to produce biogas.

Biogas is produced by the breaking down of organic, biodegradable waste or material (also known as biomass) such as vegetables, leaves, grass, weeds, leftover food scraps and such. When this organic breakdown happens it produces a gas, called biogas. via nrcs.usda.gov

A digester is a huge vessel [sometimes egg-shaped] where chemical or biological reactions are carried out. These are used in different types of process industries. via wikipedia

Recent enhancements incorporated into the original design of the Egg-Shaped Digester (ESD™) anaerobic digester system have led to simplified mechanical systems, which have further improved the life cycle benefits of ESD systems.

Consequently, these improvements have allowed many owners to consider design-build construction of a digester facility.

A few of the benefits of this construction approach include single-source responsibility, accelerated construction schedule and lower capital cost.

This approach was recently implemented at a facility located in Pinellas County, Florida, USA. The County wanted to build a facility to treat solids that would produce a Class A product in a pelletized form, which could then be marketed and sold. via www.waterworld.com

The Egg-Shaped Digester is one of the most efficient and profitable anaerobic systems for sewage sludge treatment.

Anaerobic Digestion is used to stabilize both primary and secondary sludges which settles out during aerobic wastewater treatment at Wastewater Treatment Facilities (Sewage Works).

The main output is a useful renewable (mostly methane) gas known as biogas, or biomethane when cleaned up. The gas can be used to power the equipment and offices at the wastewater treatment plant., and there may be some over which can supply local homes.

The sludges have a solids content of between 2-6% (that's 20-60 grams of Total Solids per litre).

About 70% of the mixed sludge is degradable and in a standard single-stage CSTR reactor up to 80% of it is digested reducing the TS by about 50%.

The mixed sewage sludge is rich in carbohydrates, lipids and proteins, but it is notoriously slow to digest.

The latest designs of these plants often include a pre-treatment stage where the touch incoming sludge cells are burst open to make them more easily digested, more rapidly in the digester.

The output is a liquid and solid mixture containing fibres. This can be used as liquid manure for land-spreading as a fertiliser and soil improver, as long as it has been adequately pasteurised during the process. But, unfortunately, most facility operators find that there is too much contamination with heavy metals and trace levels of other toxic chemicals for food crop application.

What Happens in an Egg-Shaped Digester?

The process of anaerobic digestion (AD) is what happens in any digester. AD is a collection of processes by which microorganisms break down biodegradable material in the absence of oxygen. The process is used for industrial or domestic purposes to manage waste or to produce fuels. Much of the fermentation used industrially to produce food and drink products, as well as home fermentation, uses anaerobic digestion.

AD is widely used as a source of renewable energy. The process produces biogas, consisting of methane, carbon dioxide and traces of other ‘contaminant’ gases. This biogas can be used directly as fuel, in combined heat and power gas engines, or upgraded to natural gas-quality biomethane. The nutrient-rich digestate also produced can be used as fertilizer.

The theory of the CSTR is that, through rigorous mixing, the composition of the contents of the reactor in any given spot in the tank is the same as in any other spot in the tank.

Wet systems commonly run at total solids levels between 2% and 8%. via biofermenergy

Wet digester systems will often start with liquid manure or waste biosolids as the backbone of their feedstock load to provide a baseload buffering effect for enhanced process stability.

A key design parameter for any digester system is the overall loading rate. For any given project no two digester suppliers will provide a system of exactly the same size. Loading rates are commonly expressed as the number of days of retention time or the quantity of organic matter applied to a given tank volume.

Experience has shown that this time represents an optimum time where gas yield is maximized without over-designing the residence time. Facilities that are co-digesting more complex wastes that include fats and proteins will commonly have retention times higher than 30 days. via digester.com 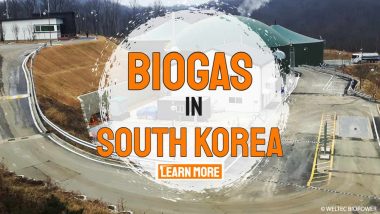 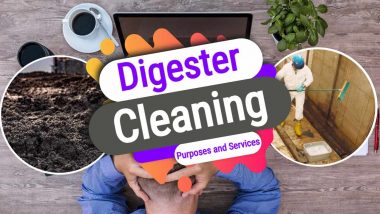