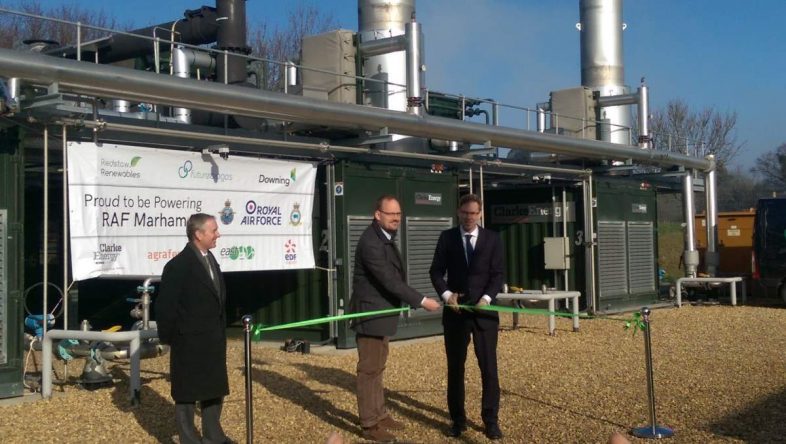 Biogas power will generate Green Electricity for a Norfolk Military Base it has been announced. The UK Anaerobic Digestion Plant will the a first to be used in this way. It will see almost all of the bases electricity requirement supplied from a new on-farm green renewable energy resource now operating.

Minister for Defence People & Veterans Tobias Ellwood MP has described anaerobic digestion (AD) as “a truly green and sustainable solution” as he launched a new deal that will see a Norfolk military base receive almost all its power from a nearby AD plant.

Future Biogas’s Redstow Renewables AD plant, which converts locally harvested crops such as maize, sugar beet, rye, and potatoes into renewable electricity (in the form of biogas) and natural fertilizer, will meet over 95% of the power needs of nearby RAF Marham. The base will be the first in the UK to run almost entirely on green electricity.

The AD plant will generate 4.5 megavolt amperes of electricity every day, enough to power 350,000 LED bulbs. The deal will save the Ministry of Defence nearly £300,000 every year and reduce its carbon emissions by 14,000 tonnes of CO2 annually. The waste residue from the AD process will also be dried and used as fertilizer to help grow local crops.

“RAF Marham is leading the way as Britain’s first green military airbase. The biogas fuel is a truly green and sustainable solution, helping us tackle climate change, support the local economy and save taxpayer money.

“I hope that this plant can act as a model and we can see more sustainable energy schemes rolled out across other military bases.”

“It’s fantastic to see the UK military join the green revolution. If we are to combat the imminent global threat of climate change, everyone, from all walks of life, needs to transition to renewable, sustainable energy as quickly as possible.

“The AD plant in Swaffham now powers a significant local institution. In doing so, it not only helps secure the energy supply of a strategic national asset, but also takes the pressure off the local electrical infrastructure, which has been really struggling to keep up with growing regional demand.”

“This pioneering deal demonstrates the enormous value that AD offers in producing home-grown, renewable energy that is increasing the UK’s energy security and helping to tackle climate change.

“It’s great to see yet another minister extolling the many virtues of AD – what we now need from government is long-term support for AD to ensure we see lots more good-news stories like this in the future.”

Electricity will be fuelled by fermented locally grown crops, providing 95% of RAF Marham's energy needs and saving the MOD nearly £300,000 every year.

The facility, built by Future Biogas, will generate 4.5 MVA of electricity every day, which can power 350,000 LED bulbs. This project has been delivered by the Defence Infrastructure Organisation (DIO) with government and private sector colleagues.

RAF Marham is leading the way as Britain's first green military airbase. The biogas fuel is a truly green and sustainable solution, helping us tackle climate change, support the local economy and save taxpayer money. via www.gov.uk

Future Biogas has announced that an anaerobic digestion plant is to be built and ran by the company to power over 95% of the RAF Marham military base in Norfolk.

The green energy partnership signals the UK military’s transition away from using fossil fuels as the Norfolk AD plant will be one of the first to power a military base. The plant will be fuelled by locally grown crops. via www.bioenergy-news.com

In the United Kingdom (UK), the Royal Air Force (RAF) Marham, the home of the UK's F-35 multi-role combat jets, is set to become the first military airbase to be powered by green electricity. Defence Minister Tobias Ellwood made the announcement on January 31, 2019, during a visit to a Norfolk biogas plant, where he officially opened the new site that will provide energy to the airbase.

On January 31, 2019, Tobias Ellwood MP opened a new biogas facility which will power the RAF Marham airbase in the UK (photo courtesy Ministry of Defence). via bioenergyinternational.com

Although it was a “first” for the UK, the US Army has been using biogas for some time.

BioConversion Solutions' (BCS) has an Advanced Fluidized Co-Digestion & Co-Generation (AFC2) anaerobic technology can be used on military bases to provide [what they describe as] the world's highest conversion rate to biogas for power generation using the base municipal wastewater and food waste as feedstocks.

They state that their proven and proprietary AFC2 process greatly improves the security of fuel supplies and energy self-sufficiency for United States and other military agencies.

Military installations of the AFC2 process often have the opportunity to share sites and facilities with host communities to defray infrastructure and operating costs as well as to increase the scale of the biomass-to-energy plant.

Military bases may also engage in Public-Private Partnerships where access is provided to base-produced feedstock, land for the plant, and long-term power purchase agreements for a privately financed, owned and operated biomass-to-energy plant. via www.bioconversionsolutions.com

In September 2018, the US Cape Cod Military Base also went renewable (100%) after it was integrated with Otis Microgrid project based on renewable energy. Experts believe that if the US military bases were allowed to develop their full potential to produce green energy, they would be significantly more secure. US armed forces, unlike US administration, has nearly doubles their Renewable Power generation between 2011-2016, as according to them they understand that national security and energy security are entwined.

Green Electricity from Biogas Power for the Military – Conclusion

A landmark partnership was celebrated yesterday with a power ‘switch on' event at Redstow Renewables, in Swaffham. The Minister for Defence People & Veterans Tobias Ellwood MP was the guest of honour.

“Britain has a proud history of pioneering ways of promoting and using green energy. The armed forces obviously have an obligation to defend our shores and interests, but we must conduct those responsibilities with a wider interest in the world around us. The UK armed forces own three per cent of UK land, which is a big part of the national real estate. We need to look at how can we create more biogas energy.

It's fantastic to see the UK military join the green revolution. If we are to combat the imminent global threat of climate change, everyone, from all walks of life, needs to transition to renewable, sustainable energy as quickly as possible. The AD plant in Swaffham now powers a significant local institution. via www.futurebiogas.com 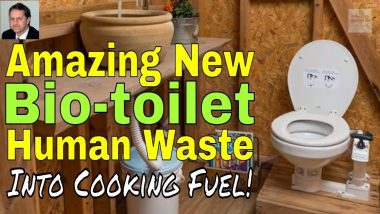 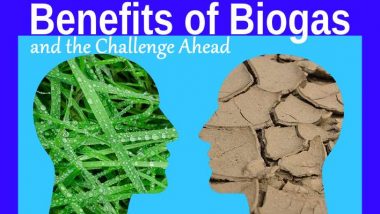 Benefits of Biogas and the Challenge Ahead