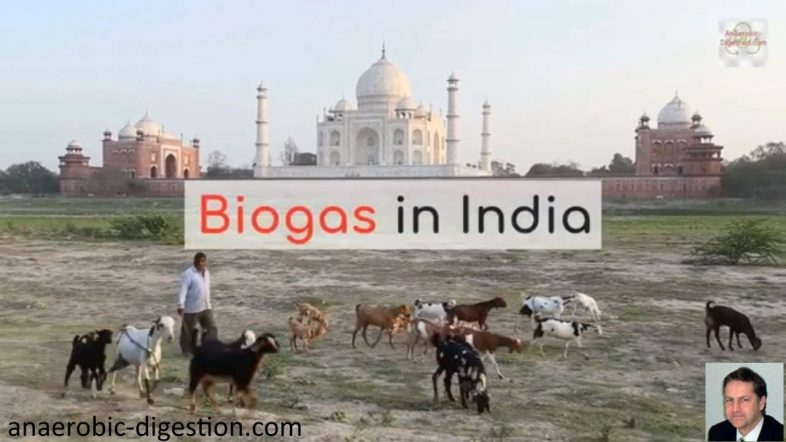 Biogas in India – Agricultural AD, Community AD and in the Home

Biogas in India so far, has been largely a story of small agricultural, community scale anaerobic digestion plants, and home-based biogas creation. This has been mostly for cooking use in the homes of the biogas plant owners/ communities.

The adoption of anaerobic digestion throughout India is required for:

In areas of high-intensity livestock farming it also has an important role (done sensitively) in ammonia emissions reduction. Preventing build-up of nitrates which then become a major groundwater and surface-water pollutant.

Unfortunately, there are several factors that limit its widespread application in rural communities in India. The most important barrier to the adoption of biogas in India, and agricultural Bio-SNG, is the lack of awareness among farmers and an attitude of disinterest within the government.

Note:Bio-SNG is another term which can be used for biogas. Substitute natural gas (SNG), or synthetic natural gas, is a fuel gas that can be produced from fossil fuels such as lignite coal, oil shale, or from biofuels (when it is named bio-SNG) or from renewable electrical energy.

The federal and state governments need to be more proactive in providing easy access to these technologies to poor farmers. In India, with so many small farms, the policies and support of the government will be decisive.

More urgency is needed in persuading farmers to adopt such technologies and to make the transition from wasteful traditional approaches to more efficient resource utilization.

As part of the initial commitments to the Climate Change Agreement, India plans to slash its carbon emission intensity (emission per unit of GDP) by 33 to 35 % from 2005 levels over 15 years. The country also plans to generate 40% of its installed electricity capacity from non-fossil fuels by 2030. To achieve that goal, India will have to shift from coal-based power generation to renewable energy sources. Biogas plants will need to be a substantial part of that effort.

Many Indian industries, in their quest for becoming more environment conscious, are turning to biogas as one of their energy sources. For example Frito-Lay implemented a biogas plant as long ago as 2009. It was the first plant within Frito-Lay's global operations (PepsiCo) to use biogas. Other companies such as Sintex Industries have introduced novel biogas digesters for the small users of this renewable energy resource.

The Indian fossil fuel industry which will need to transform itself into a renewable energy supplier, or gradually decline. In fact, it is possible that the Indian fossil fuel industry will successfully diversify, in order to survive and thrive. They may well see the opportunity that biogas plant renewable energy provides in India, and if so start developing AD plant capacity.

Some Indian biogas projects now produce biogas from Municipal Solid Waste (MSW), and some Commercial Scale AD Plants have been built, but the numbers are quite low.

In the sections which follow we will explain the different types of biogas plants commonly being developed in India. We also talk about the comparisons between biogas plant development in China, and India and he possible reason why China has been so much more successful.

A positive factor for investment in biogas in India may indirectly occur due to the Indian Law regarding Corporate Social Responsibility (CSR).

The scope for CSR projects is very broad. Businesses can invest their profits in areas such as education, poverty, gender equality, and hunger.

It has been suggested that investment in the right biogas projects might suit a number of these companies who seek to gain investor approval of their green credentials, while at the same time also meeting other laudable objectives such as:

Biogas has been used extensively in the rural areas of such countries as India, for many years.

The gas has historically, mostly been generated from family or community biogas plants using human and other domestic wastes as well as wastes from domestic animals, as substrates.

A well-known source for information for biogas plant expertise in India has for a long while been the Appropriate Rural Technology Institute (ARTI), based in Pune.

For many years they promoted brick or masonry designs which were fed with dung or human waste, while still performing a much needed service many of these have proved hard to maintain, and have fallen into disuse.

On the updated website, ARTI now says that the traditional biogas technology, based on cattle dung, is useful only to households having at least 6 to 8 heads of cattle. Because of the low rate of gas generation per unit mass of dung, and long reaction time of about 40 days, the smallest domestic digester needed for this feedstock type is large, and the yield of gas was discouragingly low.

They claim that their new biogas plant design, is much more user-friendly:

As India becomes more affluent the new designs like this one, will be likely to grow in popularity.

Despite the very high organic content of Municipal Solid Waste (MSW) in India, there has been a very low uptake of biogas technology at municipal authority level for digestion of such wastes.

Nevertheless, the market in Asia Pacific is likely to expand at a significant growth rate in the near future, due to the increasing awareness regarding waste management and disposal in India.

Urban India currently, only about 25% of MSW is processed, i.e, recycled, composted or converted into biogas or electricity. The remainder finds its way into dump sites or is burned in open areas. Because of increasing population and affluence, MSW generation is estimated to reach a staggering 4.5 lakh tonnes per day by 2030.

In 2012, Thomas Isaac initiated steps to implement the ‘Nirmala Bhavanam Nirmala Nagaram’ project, which brought relief to the residents of the municipality. The setting up of pipe composting units, biogas plants and aerobic composting units became a huge success and ignited a major revolution in waste management and energy conservation in that municipality.

“One would wonder, how the Chinese were able to install about seven million biogas plants in about four years.” So began Khadi and Village Industries Commission director Jashbhai J Patel's remarks at the conclusion of a tour of China in 1980. His rueful tone was justified. In that same report, economist TK Moulik explained that India had been among the pioneers in biogas technology but it had taken the Chinese a mere decade to overtake her.

… Unlike in India, where the biogas development programme was elite in both its initiative and composition, the Chinese process was far more adapted to village-level know-how and resources. So, while Indian scientists strove to build a technologically efficient biogas plant, the Chinese worked with the materials they had, adjusted to the capabilities of their farmers, and built one hundred times the number of biogas digesters.

And they gradually improved their technical quality as incomes and technical capabilities rose. The benefits of such an adapted approach were manifold. At the level of the individual household, they provided gas at no cost that could be used for cooking and lighting a lamp. This freed women from other daily chores such as collecting fuel and stoking a fire, while the lamp significantly expanded the work-day and improved educational levels by making it easier for parents to read and children to study after dark.

In the wake of Patel and Moulik's trip to China, a biogas promotion program was initiated in India in 1981. A 2015 paper by Shiv Kumar Lohan and others offers numbers for the changes since. By 1990 India had 1.23 million biogas plants. This number grew to 4.54 million by 2012.

And even though an Indian Biogas Association has been set up. And, this has been done to further promote the adoption of biogas, recent estimates indicate that such expansion proceeds in slipshod fashion. Last year, The Economic Times reported that of the 1,10,000 biogas plants to be set up in 2015-16, only 47,490 had been installed. via timesofindia.indiatimes.com

With India planning to reduce crude oil imports by 10% by 2022, there is increased emphasis on alternate and sustainable source of fuels. TN, a non-starter so far, is going to foray into green CNG in a big way.

Signs That Indian Biogas May Soon Rise in Popularity

There are signs that the Indian fossil fuel industry may themselves start developing AD plant capacity.

India is planning to reduce crude oil imports by 10% by 2022, which means that there is increased emphasis on alternative and sustainable sources of fuels. For example, TN, a non-starter so far, is going to foray into green CNG in a big way.

In addition, the petroleum major IOC is likely to put-up several CNG stations in Namakkal and Coimbatore regions. The mega 400 MT biogas waste plant in Namakkal will be producing compressed bio-gas. This is otherwise known as green (renewable) CNG and is best used to fuel vehicles.

In another example of how the swing away from fossil fuel and toward clean vehicle energy supply, may be starting. Consider the Namakkal plant.

But now, it has been decided to purify the bio-gas from generating green CNG using indigenous technology developed by IOC R&D Centre in Faridabad. This will be with the intention to sell the biogas as transport engine fuel. via www.newindianexpress.com

The adoption of anaerobic digestion is required for better utilization of renewable energy resources in India, and to comply with global aims to reduce the effects of climate change.

However, certain factors limit its widespread application in rural societies in India. 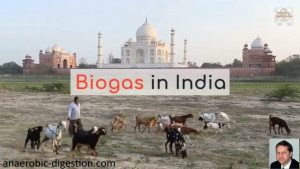 The most prominent of these is the lack of awareness among farmers and lackadaisical attitude of the government.

The federal and stage governments needs to be more proactive in providing easy access to these technologies to poor farmers.

The policies and support of the government are decisive in persuading the farmers to adopt such technologies and to make a transition from wasteful traditional approaches to efficient resource utilization.

Nevertheless, there is plenty of room for optimism for the large-scale development of biogas in India.

Government decarbonisation policy, the need for distributed rural power sources, and the shear inescapable demand for more 24/7 availability of renewable energy throughout the nation, will be a powerful driver.

Biogas plant technology will also develop to become more efficient and costs will continue to fall.

Plus, Corporate Social Responsibility (CSR) regulations may also yet prove a large contributor of funds to Indian biogas projects. India appears to be tailing well behind Chinese biogas plant numbers at present. But, in time she might again become the nation with the highest uptake of the technology. 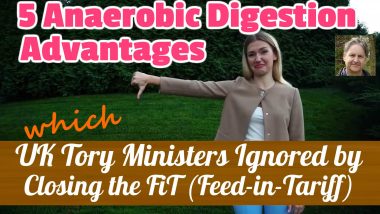 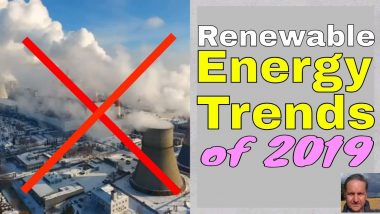