Shale Gas in the UK: Not Needed Just Move Funding to Biogas Production

Shale Gas in UK is halted! But, it's not a problem! Why?

The UK government has been subsidizing Shale Gas in the UK with massive tax breaks on investment in the idea. But now, due to unexpected earthquake activity directly initiated deep underground wherever there have been fracking experiments; all exploration has been stopped indefinitely.

Does it matter? No, as there is a readily available and much better alternative, which is also “green”. Read on to find out more:

The irony is that fracking development is not necessary.  Why torment local people just to use yet more fossil fuel? Why create problems where none need to exist?

The production of an equivalent gas which is renewable and low-carbon, is possible and it is sitting just waiting to be used. If financial uncertainties were removed to allow a rapid development of the UK's potential for more anaerobic digestion and biogas production, the production of this gas can be accelerated.

The technology is available now. Many people want to develop the needed biogas plants. A small change in UK government policy on incentives can release the potential.

Government investment into food waste collection, infrastructure and innovation is needed to put the UK at the heart of this growing global sector.

Last week, the UK Government announced an indefinite suspension of fracking for shale gas in England following a report from the Oil and Gas Authority into the seismic impact of the technology. This follows ongoing suspensions in Scotland and Wales.

As a result, the Government has to find alternative sources of natural gas to meet the UK's energy needs, whilst also seeking to achieve its Net Zero emissions targets by 2050. Look no further than biogas, says the UK Anaerobic Digestion and Bioresources Association (ADBA).

Biogas is produced from the natural process of organic matter such as food waste, wastewater, sewage, slurries and agricultural waste breaking down. The circular nature of this process, called anaerobic digestion (AD), means that harmful gases that would be otherwise be emitted by those organic wastes in landfills or incinerators are captured and a new renewable energy source is generated instead.

AD is a ready-to-use technology that helps cut emissions in the hardest-to-decarbonise sectors of heat, transport and agriculture. Upgraded to biomethane, biogas can be injected into the grid with no changes needed to the existing gas infrastructure and used as green fuel for heavy good vehicles and buses .

In the last decade, the sector has grown 350% and is now employing over 3,500 people. It however still needs policy incentives and investment to reach its full potential. In 2019, 650 AD plants across the UK produced 10.7TWh of energy. 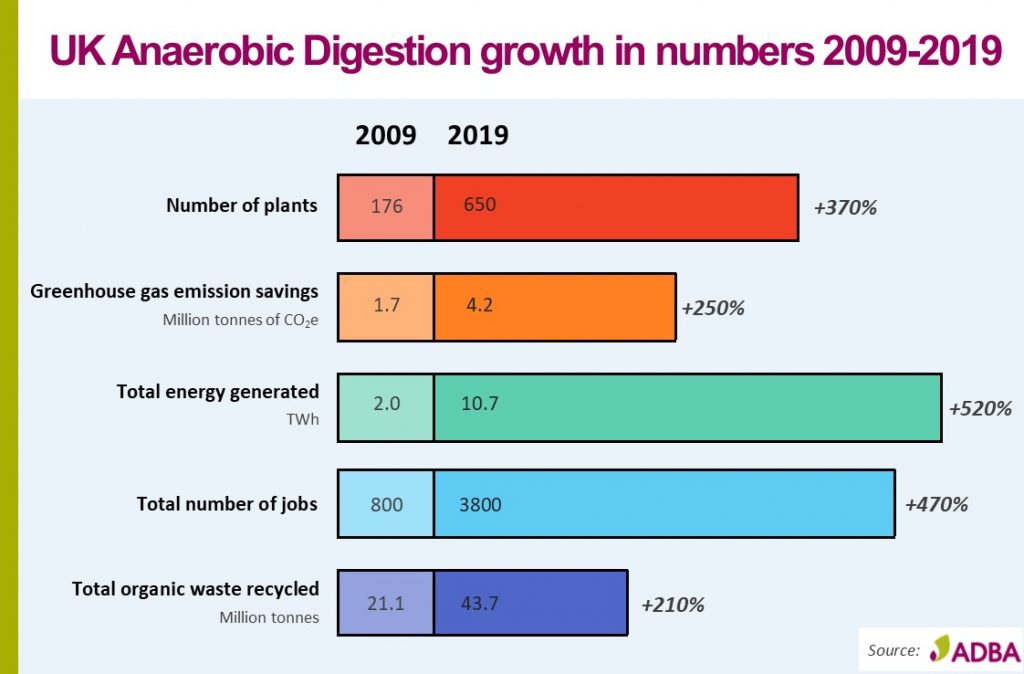 Over the next 10 years, ADBA anticipates that in addition to reducing emissions by 22.5m tonnes of CO2 -equivalent every year (circa 5% of total UK greenhouse gases emissions), it has the potential to meet nearly 20% of current domestic gas demand, providing greater energy security, and to provide 30,000 new green jobs, largely in rural areas.

The sector has also developed world-leading expertise which gives the UK a real opportunity to be at the heart of a growing global biogas industry.

“If the investment currently put into shale gas extraction was redirected to biogas production, we could make a major leap forward in achieving Net Zero emissions targets whilst helping meet the UK's energy needs and developing an invaluable asset for exports.

The Government's Resources and Waste Strategy was encouraging in its commitment to collect more food waste, but we need to ensure that this feedstock, and all other available feedstock, is then treated through AD.

We need policy and financial commitment towards developing AD infrastructure and supporting technical innovation to deliver a strong biogas industry in the UK that will sustain the economy for generations to come, whilst addressing the climate emergency that we face.”

ADBA’s vision is to see the full potential of the UK AD industry realised so it can help the UK achieve its emissions targets and other policy goals, creating a truly circular economy. 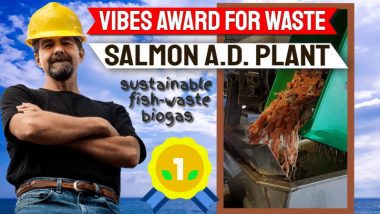 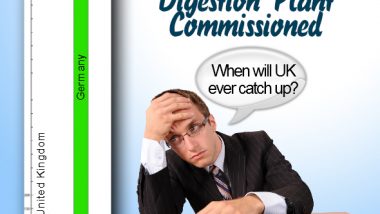