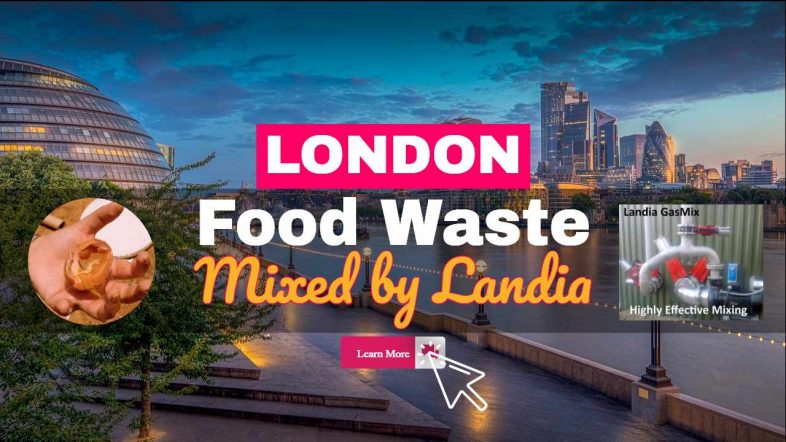 It's vital that London Food Waste, much of which is collected and used to create renewable biogas energy, is well mixed as it ferments. If not, less biogas energy is produced the recycling rate is disappointing and the biogas plant may even fail to operate correctly.

The Press Release (see below) explains how one of London's anaerobic digesters is mixed through a collaboration between mixer equipment maker Landia and the plant operator BIO Collectors.

But, why not just stop wasting food?

There are two basic reasons why Londoners, and families all around the world, waste a lot of food:

Food waste is produced by almost everyone, whether it is unavoidable (eggshells, bones, and banana peels) or preventable (brown bananas, uneaten leftovers, and mouldy bread). In fact, so much is wasted that in London food waste makes up to 30% of the average garbage container.

How Much Food Does London Waste?

That's not all, though. Only 70% of food waste in the UK comes from households. Producers, manufacturers, stores, restaurants, and other companies provide the remainder.

If Your Council Recycles Food Waste – Do Use the Service and Collect It!

If your municipality recycles food waste, take advantage of it by recycling all of your inedible scraps (eggshells, coffee grounds, and the like) as well as any food that has passed its “use by” date. Put it in the required container, such as a caddy, and leave it out for collection on the day allocated.

What Happens to this Waste After it is Collected?

Instead of ending up in a landfill or being burnt, food waste is normally collected for recycling and transferred to special processing factories where it is converted into power or compost for farmers.

No one wants to throw food out; whether it's leftover spaghetti, a mouldy slice of bread, or a dinner that no longer appeals, it occurs to everyone – but few of us are prepared to confess to doing it!

Whatever the cause for food waste, there are a few simple things you can do to maximise the value of the food you buy. 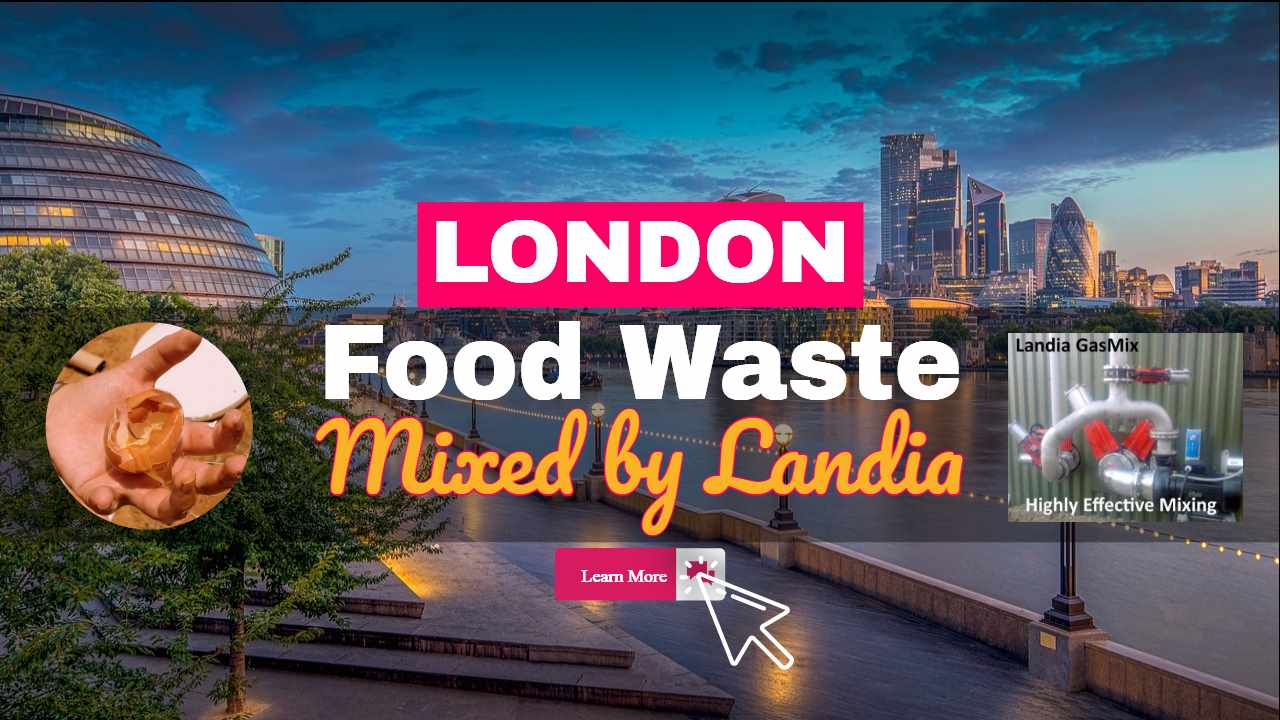 What Can You Do to Help Reduce the Mountain of London Food Waste?

Recycle for London has created a set of new printable and flexible communication templates to aid individuals in their food recycling efforts. They offer free materials such as pamphlets, posters, and logos to use, among other things.

The goal is that Londoners will be able to utilise this information to enhance their present food trash collection service as well as urge local communities to recycle more food waste. The tools available are excellent for anyone who has a blog or works in a local organisation to utilise to boost awareness of and involvement in that service.

Why is Food Waste a Concern for the Environment?

Food that is thrown away does not decompose as easily as you would believe. Food waste that ends up in landfills rots and releases methane, a greenhouse gas recently found to be 65 times more powerful than carbon dioxide. Methane escape is extremely bad news at a time when the world is already facing a climate crisis!

Remember to remove any wrapping before placing it in your kitchen caddy. It really is only food waste that should be placed there!

Is Food Waste Recycling Worth the Effort?

Anaerobic digestion is a kind of digestion that occurs in the absence of air. Just one banana peel composted in the digester vessel provides enough power for a full charge of a mobile phone, not once but twice!

How Would I Know if I have a Food Waste Collection Service in My Borough?

If you have a food waste recycling programme, you will likely be given a smaller food waste bin, or ‘caddy,' in your kitchen that may be dumped into the bigger green or garden waste bin on collection day.

Because emptying the caddy might be messy and unpleasant, it's preferable to use a biodegradable liner to keep the food waste contained and make cleaning easier.

Despite the fact that much of our food is wasted, many people in London struggle to make ends meet. At times they find themselves short of the money they need even to feed themselves and their families.

A surplus food redistribution charity like City Harvest is an example to solve this problem. It's been dubbed London's long-term answer to surplus food and food insecurity.

They distribute extra food to over 350 charities, food banks, schools, and community organisations for free in every London area. This and other nonprofits do incredible work to feed those who are hungry.

But, returning to the need for efficient recycling of food into energy, read on to find out about how the experts mix food waste while producing very valuable renewable energy: 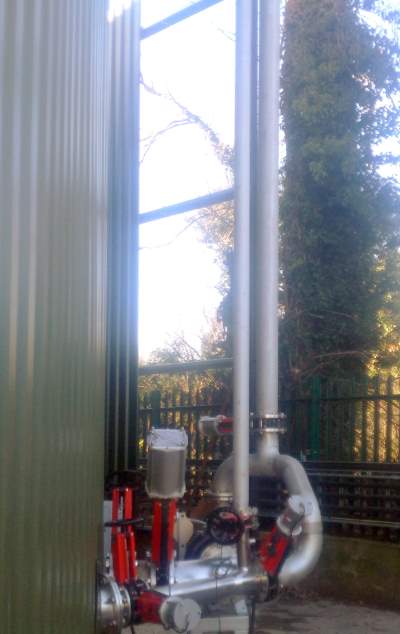 In tackling London’s food waste, of which it processes 75,000 tonnes pa, BIO Collectors’ Paul Killoughery almost nonchalantly describes the 1.7MW electricity produced as ‘the easiest thing we do’.

Of course, there’s much more to it than that, but the efficiency and effectiveness of this trouble-free anaerobic digestion operation isn’t down to luck – the Managing Director and Founder of London’s largest independent AD food waste recycling plant made it his business to take ownership of the system that converts all that food waste into biogas, electricity and fertiliser.

“Everybody knows that for AD, achieving the best possible mixing for your tank is the key”, said Paul Killoughery, “and in achieving that here for the past four and half years at our site in Mitcham, we haven’t even spent as much as £1,000 on parts.  Our homework has certainly paid off”.

As a newcomer to the industry, those early reconnaissance missions saw BIO Collectors make visits to key exhibitions and sites both in the UK and mainland Europe, where the company gained a warts and all insight into what AD operators were experiencing.

“Very early on we decided that we definitely didn’t want mixers inside the tank that we couldn’t get to”,

“Naturally, we wanted our tanks to be mixed properly, but for us to manage our own plant on a day to day basis, and put right any wrongs, we simply had to have equipment that was easily serviceable and repairable from the outside.  As it happens though, things haven’t gone wrong.  We’ve had no major problems whatsoever”.

“We heard horror stories of crust becoming so thick that it had broken the tank, making it impossible to retrieve mixers, so we chose a proven system that wouldn’t see the development of different layers of waste within a tank. For our regime, everything had to be mixed properly, with never any sign of a crust.  In fact, Landia, the manufacturer we chose to work with, for their externally-mounted GasMix system, said that we could achieve our needs with three mixers, but because our philosophy is that everything has a redundancy, we decided on four:  two GasMix and two separate Landia propeller mixers (also externally-mounted), so that we always have back up.  Another big plus for us was knowing that unlike many, Landia has the manpower and the spare parts right here in the UK to offer us immediate help if and when we ever need it”.

BIO Collectors’ AD operation in Surrey is unusual in as much that it operates along very similar lines to how the water industry generates renewable energy from sewage sludge.   The Mitcham plant began as an aerobic/composting site, which worked well, but ultimately wasn’t considered to be the best business model.  After BIO Collectors bought the business, they decided to add an AD plant, creating a two-phase system that sees the aerobic treatment pasteurise and hydrolyse the food waste, making it easier for the methane bugs to work – before pumping the liquid into the AD tanks.

Whilst the vast majority of tanks rely on hydrolyzation in the AD tank, BIO Collectors already has this part of the process completed.  The net result is a very significant 30%-plus reduction in retention time.

“It’s not what one would choose to build from the offset”,

“but as it does for water companies, it works very well for us. We probably do more mixing than most, and we get great gas – quickly.  Energy usage was a secondary consideration, but we currently only use the Landia GasMix at a rate of 5 minutes on and 10 minutes off – and depending on what we see and how high our gas levels are, we can choose to turn off the propeller mixers if we need to.  We also use our Landia pumps to pump from our AD tank back into the AD liquor store, so we don’t need a separate pump for that task.  For its installation, the other advantage we saw with the Landia GasMix was that it didn’t require extra structure for the tank, nor a concrete lid, which would have been far more complex.  We’ve double-valved everything and are fully bunded, as well as having everything protected from vehicles, but the AD part of our business is still the easiest.  If you understand the process and realise that the right mixing is essential, then it doesn’t have to be complicated”.

The only gas-to-grid food waste operation in Greater London, and one of only three in the whole of the South East, BIO Collectors has contracts with the likes of Sainsbury’s and Pizza Hut, also collecting bulk waste from distribution centres, plus schools, hospitals and hotels, as well as liquid waste from breweries and factories. With only just over 50% of London’s 33 borough councils collecting food waste separately, the company wants to see the same rules implemented that have helped bring about vast improvements in Scotland, Wales and Northern Ireland – improvements that have left England lagging way behind with a recycling rate of just 35%.

“The result of good mixing has also produced top quality digestate”, said Paul Killoughrey.  “It is high in NPK (Nitrogen, Phosphorus, Potassium) and very popular with the arable farms in Surrey who see increased yields.  Our PAS 110 test for residual biogas conclusively shows that our mixing system is working to an extremely high standard.  It is a major benefit to the whole process”. 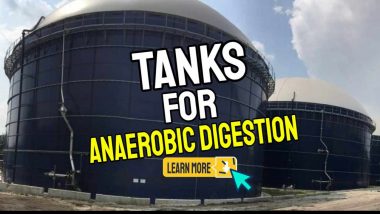 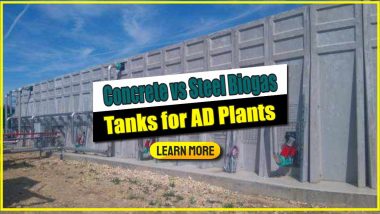